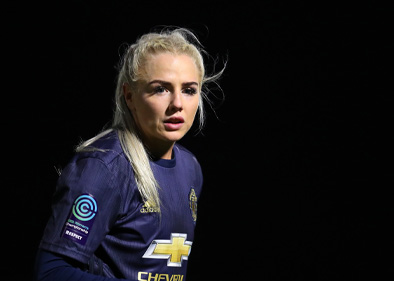 Member of the Women’s England International Team since 2014, Alex Greenwood is a professional English left back, she can also play at centre-back and is considered to be a set-piece specialist. She has been signed for numerous clubs including Liverpool, Notts County and Everton. She is currently playing for Manchester United WFC where she is captain as well as a left-back defender.

At the age of eight, Alex joined Everton Ladies Football Club. She made her way up to her first team debut in 2010, during the qualification round of the UEFA Women’s Champions League. After an amazing performance throughout the 2012 season with the club, Greenwood was named the FA Young Player of the Year. After signing a two-year contract with Notts County in 2014, she spent two years with Liverpool before eventually signing with Manchester United in 2018 where she was announced as the captain.

Beginning her international career as captain at the youth level, Greenwood was selected by coach Mark Sampson for the senior national team after her performance in the 2012 UEFA Women’s Under-19 Championship. She was the youngest member of the squad that played in the 2015 FIFA Women’s World Cup and also won bronze medals due to their victory against Germany in the third place play-off. Most recently, Alex played for the England Lionesses in their victory at the 2022 Women's Euros, demonstrating her talents as a defender alongside Lucy Bronze and Rachel Daly.

To book Alex Greenwood to make a personal appearance at your corporate event, function or conference, simply contact the Champions Football Speakers agency by filling in our online contact form or by calling a booking agent directly on 0207 1010 553.