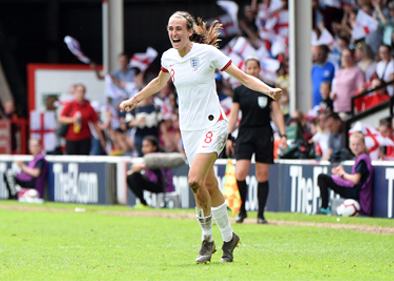 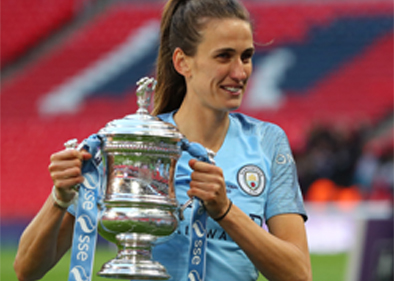 English midfielder, Jill Scott MBE formerly played for Manchester City as well as the English national team. She has previously been described as one of England’s four outstanding players in a FIFA technical report as well as “an energetic, ball-winning midfielder who works hard at both ends of the pitch.”

Throughout her childhood, Scott was a keen long-distance runner, she ran for Sunderland Harriers winning the North of England Under-13 cross-country title and Junior Great North Run. As she was also a member of Bolden Girls Football Club, it came to a point, at 13 years old, where she had to pick between the two sports, this is where her focus on football began. She studied at the University of Sunderland to gain a foundation degree in sports where she played for the football team along with England team-mate Carly Telford before attending Loughborough University together to study sport further.

Jill’s club career began at Sunderland Women at the age of 18, it wasn’t long before she won the Women’s Player of the Month award for her performances at both club and under-19 country level. She was later signed by Everton Ladies where she was selected for the FA Tesco Players’ Player of the Year award ahead of Alex Scott and Karen Carney. After seven years with Everton, Jill signed a two-year contract with Manchester City, who went on to win the Continental Cup trophy in 2014. She is still signed to Manchester City today.

Having captained the under-19 side for 18 months, Scott eventually received her first senior call-up in 2006. She made it to the 2007 World Cup squad and scored her debut international goal in a 6-1 victory again Argentina in the group stages. She was then also in the 2009 UEFA Women’s European Champions and the 2011 FIFA Women’s World Cup team. In 2012, Jill Scott was selected as part of the Team GB squad for the London Olympics. In the 2020 New Year's Honours, Jill was awarded an MBE for the services she has made to women's football. Most recently, Jill was part of the tournament-winning Lioness squad for Euro 2022, playing in the final alongside fellow midfielders Fran Kirby, Georgia Stanway and Leah Williamson. Following the team's success, they received the profound Inspiration Awards at the 2022 Pride Awards. Most recently, Jill has been named as a contestant on 'I'm a Celebrity... Get Me Out of Here!' 2022.

With over 150 appearances, Jill is one of the Lionesses most experienced players and continues as a member of the team for major tournaments, such as being a part of the Women’s Euro squad for 2022. Jill Scott is a virtuous professional who has played at the highest levels for over 18 years.

To book Jill Scott to make a personal appearance at your corporate event, function or conference, simply contact the Champions Football Speakers agency by filling in our online contact form or by calling a booking agent directly on 0207 1010 553.