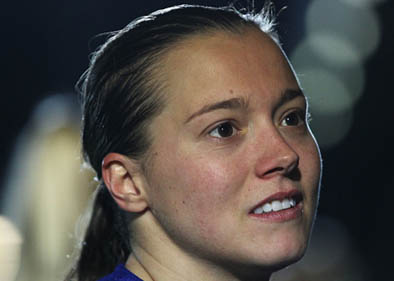 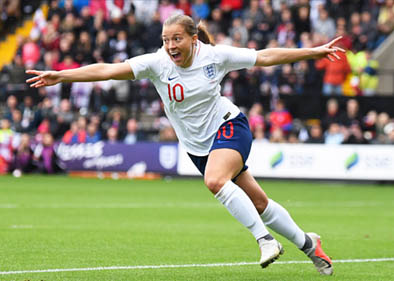 Profoundly talented professional English footballer, Francesca Kirby, is a forward who plays for the Chelsea women's team and the England national team. She has represented her country multiple times during her career and is greatly known for her part in the England UEFA Women's Euros team who secured first place. Francesca is now available to book for different speaker events and will talk about her journey throughout the football industry as a woman.

Initially playing for her hometown of Reading at the age of seven, it was clear that Francesca was talented. As her skills progressed, she became the first female player to receive a professional contract from Reading in 2012. Following her spectacular 3 years at Reading, Francesca was transferred to Chelsea. Her influence in the match against Sunderland ultimately secured the club's first FA Women's Super League title in October 2015 and continued into the 2016 season, when Francesca secured Chelsea's return to Wembley Stadium in the 2016 FA WSL.

Having previously featured in the England Under-23 squad, in 2014 Francesca became the first WSL 2 player to be called up to the senior squad. She made her senior debut in 2014 and was able to score the second goal in a 4-0 defeat against Sweden. Throughout her 8 years playing for the England Lionesses, Francesca has been a key player to date and was also part of the 2022 Women’s Euros squad that went on to win the tournament, playing as a midfielder alongside Jill Scott and Leah Williamson under the watchful eye of Manager Sarina Wiegman. Following the team's success, they received the profound Inspiration Awards at the 2022 Pride Awards.

Dedicated and passionate, Francesca has received multiple awards throughout her career, both individually and as a team. At the end of her 2014 season at Reading, she was announced as the WSL2 Players' Player of the Year.  After developing her skills, she also went on to win the title of PFA Player's Player of the Year and Football Writers' Women's Footballer of the Year for the 2017-18 season at Chelsea. As Chelsea’s all-time leading goal scorer, Francesca has been admired for her sporting performance, which is why she has become such a sought-after speaker for multiple different events.

To book Francesca Kirby to make a personal appearance at your corporate event, function or conference, simply contact the Champions Football Speakers agency by filling in our online contact form or by calling a booking agent directly on 0207 1010 553.