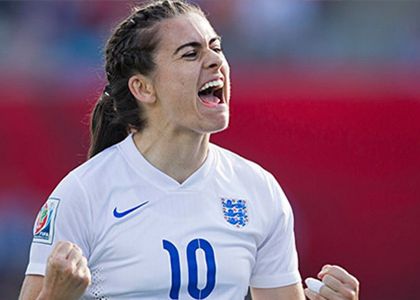 Twice named FA Young Player of the Year, Karen Carney is an incredibly experienced footballer who has enjoyed huge success both domestically and internationally having had the honour of representing Team GB at the 2012 London Olympics. Carney shares her wealth of knowledge and experiences explaining the fundamentals to success and peak performance at an elite level

Karen Julia Carney is an English international football winger. She is signed to Chelsea Women in the FA WSLand is a member of the England women’s national football team. Since making her senior debut in 2005, Karen Carney has made more than 100 appearances for England, including at the 2005, 2009 and 2013 European Championships and the World Cup in 2007, 2011 and 2015. She also competed with the Great Britain team at the 2012 Summer Olympics.

Carney’s wonderful and illustrious experiences within the domestic structure of Women’s Football in England makes for an incredibly well informed performance as a football speaker in which Karen Carney is able to elegantly portray the development of the Women’s game and what she has learnt about professionalism from such a young age. Carney truly personifies passion and commitment with an unrelenting work ethic that has allowed her to play football at the highest level around the globe.

On 27 January 2009, Chicago Red Stars of the WPS made Karen Carney their first signing. She was selected by the Chicago Red Stars in the 2008 WPS International Draft, joining Emma Hayes who had been the Arsenal Ladies Football Club Assitant coach. Following two seasons in the American Women’s Professional Soccer(WPS) with Chicago Red Stars, Carney rejoined Birmingham ahead of the 2011 FA WSL. In 2015, Karen Carney became the first female to ever be inducted into the Birmingham City Hall of Fame.

During a fantastic career, Carney became the youngest player to be handed an International Cap and went on to be an indispensable member of the UEFA Women’s Euro 2005 scoring critical match winning goals that brought huge media attention. Carney won the PFA National Young Player of the Year award in 2005 and 2006. Only the 4th women to ever receive 100 International Caps. Once again an important member of the England team that finished third in the 2015 FIFA Women’s World Cup.

A truly inspirational figure who commands the utmost respect within football and in particular Women’s Football, Karen Carney was award an MBE in 2017 for her services to football, a true testament to her glittering career. Karen Carney has a wealth of knowledge about domestic, International and global football, her eloquent and polished performances as a football speaker make Carney an extremely sought after football speaker.

To book Karen Carney to make a personal appearance at your corporate event, function or conference, simply contact the Champions Football Speakers agency by filling in our online contact form or by calling a booking agent directly on 0207 1010 553.