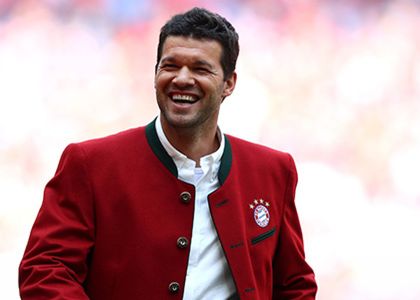 Michael Ballack is a retired German footballer who has represented a number of Europe’s biggest clubs. Ballack represented Germany 98 times and was one of the top goal scorers in the history of the German national team. Ballack was selected by the legendary Pele as one of FIFA’s 125 Greatest Living Players and as the UEFA Club Midfielder Of The Year in 2002. Winner of the German Footballer of the Year award three times, Ballack was renowned for his passing range, powerful shot, physical strength and commanding presence in midfield.

Michael Ballack began his career as a youth at local team, Chemnitz, before he went on to make his professional debut in 1995. In March of 1996, Ballack made his debut for Germany’s Under-21 side, a reflection of his potential and talent as a player. Transferring to FC Kaiserslautern in 1997, Ballack was apart of the team that won the Bundesliga in Ballack’s first season at the club; his first major honour. During the 1998-99 season, Ballack became a first-team regular and his impressive performances meant he earnt his first senior national cap for Germany.

Early successes and recognition both domestically and Internationally saw Ballack move to Bayer Leverkusenin 1999 for a staggering €4.1 million. The 2001-02 season saw him win a slew of runners-up medals as Bayer Leverkusen finished second in the Bundesliga, DFB-Pokal, as well as the UEFA Champions League. In the 2002 World Cup, Germany lost to Brazil in the final meaning Ballack once again was won a runners up medal.

Consistently performing at an incredibly high level saw Michael Ballack make €12.9 million move to German giants, FC Bayern Munich, this transfer saw Ballack gain further honours as the team went on to win the Bundesliga and DFB-Pokal double in 2003, 2005 and 2006, trophies that had eluded him previously.

Ballack’s diverse and decorated time in German domestic football is eloquently discussed when he performs as a football speaker. Michael speaks of the consistency and discipline required to succeed and win trophies along with the determination to deal with adversity to turn set backs into future successes, an incredibly important skill that translates to all walks of life.

Ballack had become a prolific goalscorer from midfield, scoring 58 goals for Bayern Munich between 2002 and 2006 before he travelled to England and joined Premier League club Chelsea. During his time at Chelsea, Ballack won his first English honours, the FA Cup and Football League Cup, in his first season at the club.

Injury ruled him out much of 2007 but he returned the following season, helping Chelsea reach their first ever Champions League final. He also went on to help the club win the FA Cup again in 2009 and then once more as part of a league and cup double in 2010. An instrumental and vital part of the team, Ballack enjoyed five successful seasons at Chelsea and became a favourite among fans before he returned to Bayern Leverkusen.

Internationally, Ballack has played in three UEFA European Football Championship’s alongside two FIFA World Cups. Ballack was appointed captain of Germany’s national team in 2004 showcasing his leadership abilities and scored consecutive game-winning goals in the quarter-final and semi-final to help his country to the 2002 World Cup Final. Ballack also led the team to the semi-finals of the 2006 World Cup as well as the Euro 2008 final.

Now a pundit and analyst for ESPN, Michael Ballack has enjoyed tremendously decorated and successful career within football having won over 15 individual awards and accolades as a representation of his incredible footballing prowess and a number of trophies as part of a team. A truly inspirational figure who is a real winner and has enjoyed success wherever he has gone, Michael Ballack gracefully discusses the tools and requirements that are vital to success in football, life and leadership and shares many tales and anecdotes from his diverse career making him a wonderfully entertaining and informative addition to any event as a football speaker.

To book Michael Ballack to make a personal appearance at your corporate event, function or conference, simply contact the Champions Football Speakers agency by filling in our online contact form or by calling a booking agent directly on 0207 1010 553.