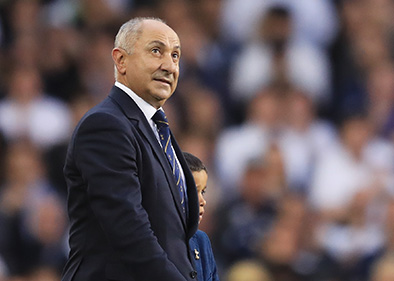 Football speaker Ossie Ardiles is a football manager, pundit and former midfielder who won the 1978 FIFA World Cup as part of the Argentine national team. He now runs his own football school in the UK called the Ossie Ardiles Soccer School. Ardiles remains a popular and familiar name amongst Tottenham Hotspur fans; with more than ten years as player for the club, Ardiles became synonymous with Spur’s success during the 1980’s and in his work as a football speaker regularly regales audiences with a number of brilliant stories from that time.

Ossie Ardiles was born in Córdoba, Argentina and played for Instituto de Córdoba from a young age. As a youngster, Ardiles played football in the streets and was given the nickname Pitón (python) by his brother as reflection of his snake-like dribbling skills. Named as El Gráfico’s best player of the interior in 1974, Ardiles abandoned his law degree studies in order to play professional football. He also played for Club Atlético Belgrano and Huracán before making his career defining transfer.

Ossie Ardiles joined Tottenham Hotspur after being a part of the winning World Cup game against Holland in 1978. During his 10 seasons at the club, Ossie helped Tottenham Hotspur win the FA Cup in his third season there and collaborated with pop duo Chas & Dave along with the rest of the Tottenham players for a song, “Ossie’s Dream“. Ardiles once again played a huge part in another FA Cup triumph the following year, but did not play in the final because it had already been arranged with the Spurs management that he would leave early to join up with Argentina’s 1982 World Cup squad.

In the wake of the Falklands War in between Britain and Argentina it became increasingly difficult for him to return to White Hart Lane and as a result he went on loan to Paris Saint-Germain in France. After just one season in Paris, he returned to Tottenham Hotspur and helped the club to win the UEFA Cup in 1984. Experiencing this adversity during the first Gulf War, including his temporarily requirement to vacate the British Isles; Ossie Ardiles shares both personal and professional stories, trials and tribulations with guests as a football speaker.

In an illustrious management career, Ossie Ardiles has managed 15 teams around the world. His greatest accomplishments as a manager came when he led Swindon Town and West Bromwich Albion to promotion before his greatest success in Japan. Managing in the J League where he won the Nabisco Cup and Tokai Cupwith Shimizu S-Pulse as manager. Finally during his management career in Japan, he led Tokyo Verdy to the Emperor’s Cup.

A headline grabber during his time as a player, Ossie Ardiles remains an entertaining focal point at any event; his work as a football speaker has taken him up and down the country, though he inevitably remains most highly regarded in and around the Tottenham Hotspur stomping ground. The Argentinean International and Tottenham Hotspur Hall of Fame inductee, Ossie Ardiles is available to hire for any event as a football speaker.

To book Ossie Ardiles to make a personal appearance at your corporate event, function or conference, simply contact the Champions Football Speakers agency by filling in our online contact form or by calling a booking agent directly on 0207 1010 553.