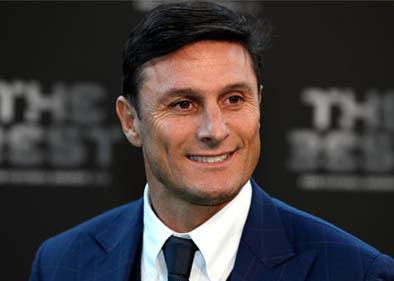 Javier Adelmar Zanetti is an Argentine former professional footballer who played as a defender or midfielder. He started his career in Argentina, first with Talleres, and then Banfield. From 1995 to 2014 he played for Italian club Inter Milan and served as captain from 2001.

With 1,114 official games played, he is seventh on the list of players in history with the most career appearances. He is also the foreign player with the most appearances in Serie A, and holds the fourth-most appearances in the league, behind only Paolo Maldini, Gianluigi Buffon and Francesco Totti. He is the most capped player in the history of Inter and won 16 trophies with the club: five Scudetti, four Coppa Italia, four Supercoppa Italiana, one UEFA Cup, one Champions League and the FIFA Club World Cup. He is also the most capped player as captain in the Champions League.

With the Argentina national team, he played in 143 games, a figure that makes him the second player with the most appearances in the history of La Albiceleste, having held the record from 2007 to 2018. With Argentina, he reached the final of the Copa América in 2004 and 2007, and the Confederations Cup in 1995 and 2005.

Known for his versatility, he was adept on both the left and right wing, having played on both flanks as a full back, as well as a winger. He could also play as a defensive midfielder. On retiring, the club retired his number 4 jersey and named him as its vice president. He has been named an ambassador for the SOS Children's Villages project in Argentina by FIFA, and in 2005 he received the Ambrogino d'Oro award from the city of Milan for his social initiatives. Zanetti is also a Global Ambassador for the Special Olympics.

To book Javier Zanetti to make a personal appearance at your corporate event, function or conference, simply contact the Champions Football Speakers agency by filling in our online contact form or by calling a booking agent directly on 0207 1010 553.