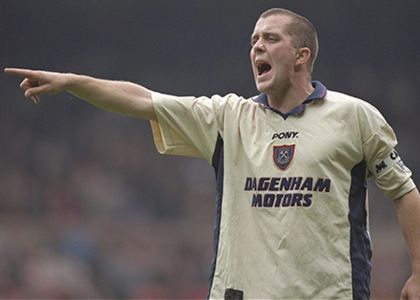 Beginning his career at Birmingham City in 1985, Julian Dicks is best known for spending ten years with West Ham United from 1988 – ‘93 and again from ’94 – 1999; Dicks transferred to Liverpool for the 93/94 season where he played in the Premier League for the first time. Dick’s career took place during one of UK football’s most impressive eras, his work as a football speaker frequently discussing the magic of that period.

Dicks was renowned for often being cautioned and sent off by referees, his first red-card was in a match versus AFC Wimbledon in the Football League Cup in the 1989–90 season. It was an infamous encounter which included an on-pitch brawl between the opposing players and the fighting was sparked by a two-footed tackle by Wimbledon player, Dennis Wise on Dicks. Six players were booked with the game being described as “a disgrace to football” by journalist, Brian Woolnough. Julian often speaks of this incident and the controversy of the game during his encounters as a football speaker.

Having appereared for England Under 21’s and England B, Dicks never earnt a full England Cap however in 1997, with Glenn Hoddle now manager of England, Dicks by chance met his assistant, John Gorman whilst on holiday. Dicks claims Gorman had told him he would stand a better chance of being picked if he had grown his hair. Dicks frequently shaved his head sporting a skinhead hairstyle. Gorman also said that Dicks had been a candidate for selection for a game against Mexico in 1997. This encounter is hilariously spoken of when Dicks performs as a football speaker.

Making almost two hundred appearances for West Ham United during his playing career it came as no surprise when Dicks accepted the offer to manage the teams Ladies club in 2014. Already established as a dedicated football speaker for the club, Dicks had managed a number of other teams prior to joining West Ham Ladies.

Dicks managed Wivenhoe Town, Grays Athletic and Sealand before his appointment with West Ham Ladieswhich eventually led to Dicks being appointed as first team coach at West Ham United under the management of Slaven Bilic.

Dicks was known for his tough-guy persona and frequently came under criticism from footballing authorities for his behaviour on the pitch which led to numerous disciplinary measures, in his work as a football speaker, Dicks has discussed the prevalence of violence in the footballing industry and even gave a tongue-in-cheek cameo appearance in the film Football Hooligan Factory. A true character who is certain to provide a thoroughly entertaining and engaging performance as a football speaker, Julian Dicks is available to hire for any event.

To book Julian Dicks to make a personal appearance at your corporate event, function or conference, simply contact the Champions Football Speakers agency by filling in our online contact form or by calling a booking agent directly on 0207 1010 553.