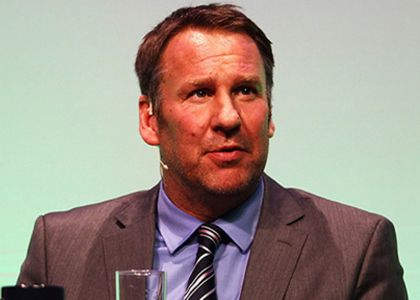 A leading figure with the world of football speakers, Paul Merson is undoubtedly one of the most popular characters in football. Having enjoyed a successful professional football career as well as turning his hand to managerial and punditry work, Merson was renowned for his playmaking ability, Paul’s career spanned from 1985 to 2006 in which time he enjoyed spells with a number of elite clubs and his national side.

An ideal football speaker for any event, Paul elegantly describes the drive and determination required to perform at the highest level in football at a consistent level combined with the ability to perform under the pressure of a monumental and ever growing fan following. His extensive and impressive skills set has made Paul Merson one of the most desirable football speakers on the after dinner speaker circuit.

Beginning his career at Arsenal in 1984 as an apprentice, Merson made his debut for the side in 1986 against Manchester City before establishing himself as a permanent figure in the team towards the late eighties. Merson’s breakthrough year came in 1989 when he was at the centre of Arsenal’s First Division winning campaign, a season which culminated in Merson being named as PFA Young Player of the Year. Winning numerous trophies with the Gunners including league titles, a League Cup and a European Cup Winners’ Cup to name a few. Paul Merson enjoyed great success in professional football in one of the most competitive arenas in the world.

Merson played for Arsenal 423 times in total, scoring 99 goals in all competitions before moving to Middlesborough for a record £5 million pound fee. Playing for a highly successful club like Arsenal has given Paul the insight into life at the top and the requirements for success, allowing him to deliver intriguing talks as a football speaker.

Merson went on to play for a number of teams domestically namely Aston Villa and Portsmouth. Paul first taste of International football came in a friendly against Germany. He went on to play in the 1992 Euro Championship, 1994 World Cup and 1998 World Cup, accumulated 21 caps for his country, scoring on three occasions and playing part in a team that had one of the most successful runs for England in the modern era of the sport.

Following a brief spell as manager of Walsall, Merson began a career in the media as an analyst and pundit. A regular figure on Sky Sports, Merson quickly emerged as one of the most familiar and popular faces on football coverage offering unique insights and entwining his effortless humour and infectious characterwhich charmed audiences across the nation. Also a columnist and co-presenter on hit TV show Soccer AM, Merson is best known for his ongoing exploits on Gilette Soccer Saturday where is a firm favourite on the panel.

An incredible football speaker, Paul ensures the whole audience feels a part of his journey in professional football as enjoys engaging with the crowd and putting his punditry work to use during talks about the game in the modern era. Offering his intriguing views and opinions, Paul Merson is sure to provide a thoroughly engaging and intriguing performance, renowned for his ability to challenge and spark up debate, Paul Merson is available to hire as a football speaker for any event and is certain to provide a thoroughly entertaining and interesting event for guests.

To book Paul Merson to make a personal appearance at your corporate event, function or conference, simply contact the Champions Football Speakers agency by filling in our online contact form or by calling a booking agent directly on 0207 1010 553.