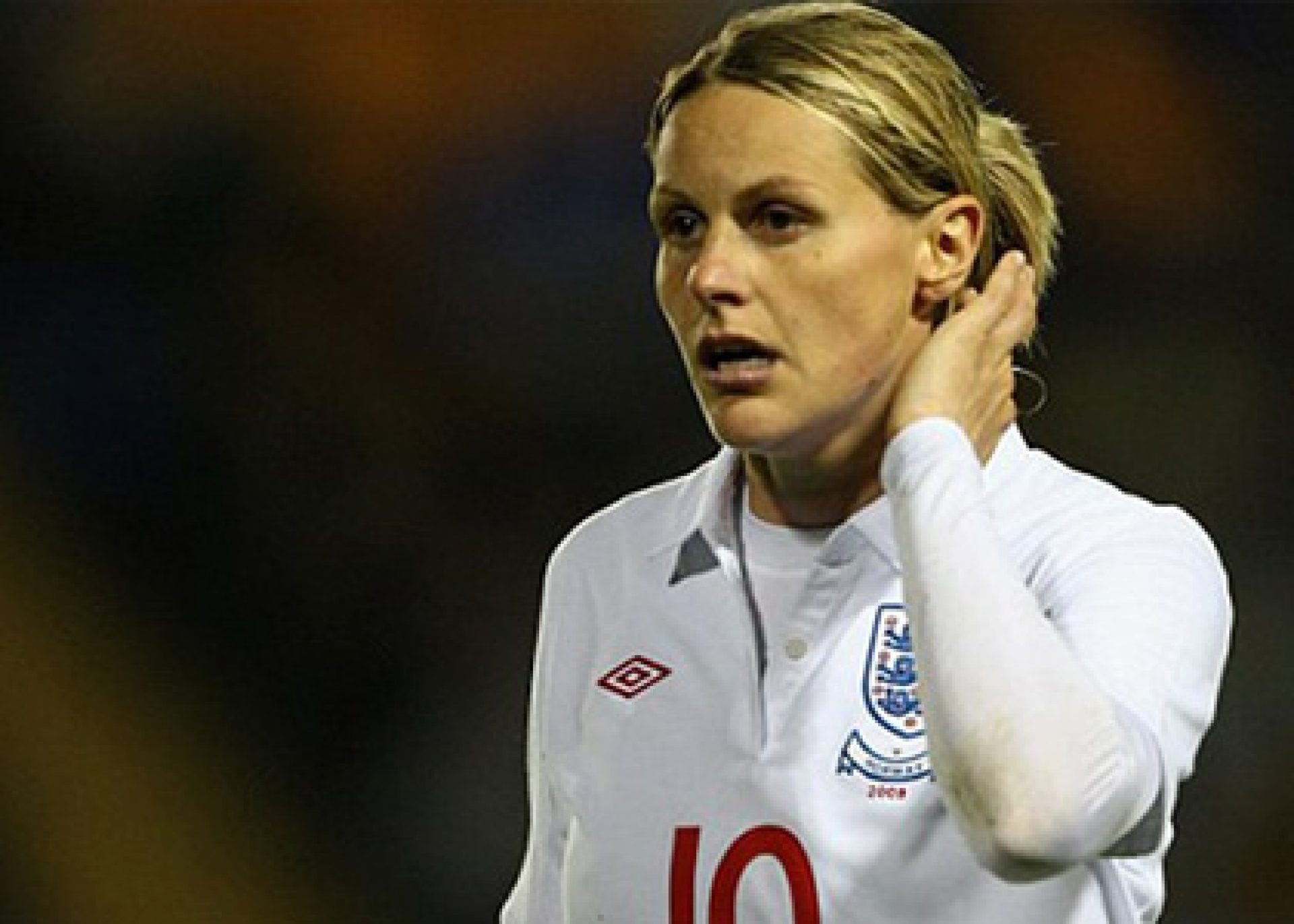 Kelly Smith MBE is England’s greatest ever female footballer, with 177 caps and 46 goals to boast it is doubtful her record will be broken for many years.

Kelly is currently Player/Coach for Arsenal and started her career in 1994 for Wembley Ladies before joining Arsenal Ladies two years later. In 1997 she moved to the USA where she played for Seton Hall Pirates, New Jersey Lady Stallions, Philadelphia Charge and New Jersey Wildcats. To this date she holds the highest goal scoring record in college football to date. Kelly is a very popular ﬁgure in the USA which was highlighted earlier this year when she worked as a TV pundit for FOX Sports during the Women’s World Cup.

While growing up in the Garston area of Watford, Smith regularly played football on boys’ teams until, at the age of seven, she was kicked out of Garston Boys Club – despite being the top goalscorer – when the parents of her male opponents complained. Kelly Smith went on to develop her skills at Wembley Ladies and was heralded as “the outstanding prospect in the women’s game today” the following season sparking a move to Arsenal Ladies where with her abundance of skill and ability helped the team to win the Women’s Premier League.

Smith enrolled at the university and was a student-athlete. She played for the Seton Hall Pirates from 1997 through 1999. In her first year at Seton Hall in 1997, Smith set scoring records for the Big East Conference and became the first athlete in any sport to be the conference’s (Offensive) Player of the Year and Newcomer of the Year in the same season. In the following two seasons, she was the leading scorer not only in the Big East, but in the whole of NCAA Division I, and was named Big East Offensive Player of the Year in both years. At the end of her university career, the school retired her number 6 shirt, she became the first Seton Hall athlete in any sport other than basketball to have a number retired.

At the culmination of her studies, Smith remained in the USA remarking: “women’s football in England is a joke.” Smith’s first professional club was New Jersey Lady Stallions of W-League, for which she played on from 1999-2000. However, a new top-flight women’s league was about to start in the United States and Smith stayed in the country in order to participate in the upcoming project. The Women’s United Soccer Associationwas formed in early 2000 and Smith was drafted second overall in the 2001 WUSA Foreign Allocation Draft by the Philadelphia Charge. Smith played all three seasons with Philadelphia and was named in the 2001 WUSA Global 11 All-Star Team.

In 2005 Kelly returned to England and re-joined Arsenal until 2009 when she returned to the USA to play for Boston Breakers. In 2012 Kelly came back to England and re-joined Arsenal for a third time and, to date, she averages just under a goal in every game, an amazing professional statistic. In an Arsenal Ladies career filled with silverware and accolades winning 4 Women’s Premier League titles along with a host of other domestic and European trophies.

Internationally, Smith made a huge impact in the England shirt and was referred to as the best player within the Women’s game. She has competed in the 2001, 2005, and 2009 editions of the UEFA Women’s Championship, as well as the 2007 and 2011 FIFA Women’s World Cup with England. She also played in the 2007 China Cup against the United States, Germany and China where she was named the player of the tournament. Smith was voted third in the 2009 FIFA Women’s World Player of the Year, fourth in 2007 and fifth in 2006 and 2008. When she called time on her International career in 2015, Smith left the game as the highest International goal scorer and was rewarded with an MBE for her services to football.

Whilst Kelly has had an exceptional career on the ﬁeld she has also gone through her fair share of challenging times off the ﬁeld. When injury lead to an alcohol problem and on her return to England she beneﬁted from former Gunner captain Tony Adams’ Sporting Chance Clinic. Kelly is an inspiration to the women, men and children of today and is passionate about working with younger people as they aspire to develop and better themselves. Ideal for schools, radio, television, events, columnist & blogger. Kelly Smith MBE is certain to be a fantastic addition to any event as a football speaker.

To book Kelly Smith MBE to make a personal appearance at your corporate event, function or conference, simply contact the Champions Football Speakers agency by filling in our online contact form or by calling a booking agent directly on 0207 1010 553.