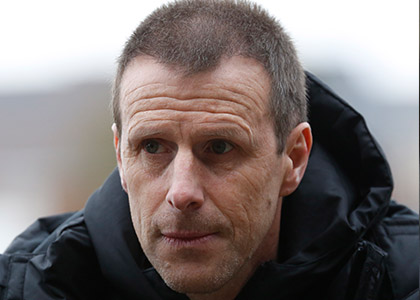 Steve Claridge is a former player, manager and football pundit who enjoyed a successful playing career across a hoard of clubs throughout the country. In a career that saw Claridge making 828 appearances, Steve Claridge retired in 2012 having played for more than 20 clubs during his 29 year career. Working with the BBCs football coverage, Steve Claridge is a popular figure across BBC Sport and an even more popular football speaker.

Steve Claridge’s career was known in particular for its longevity and diversity, born in Portsmouth, he has spent a significant portion of time with teams from Hampshire and Dorset, having begun his career with non-league Fareham Town in 1983. After failing to gain a permanent contract at local league club A.F.C. Bournemouth, Claridge went on to spend three years at Weymouth, his longest single spell with any club. In between 1988 and 1996, Claridge played for a number of Football League teams, before eventually moving to Leicester City

During his time at Leicester City, Claridge played in the Premier Leagueand experienced what was arguably a career high when he was apart of the team that won the 1997 Football League Cup. Just a season later he moved to Portsmouth to embark upon a tenure as a player manager before a spell with Millwall, he sacrificed the level at which he played and dropped down to the Southern Premier League to work as player-manager for Weymouth. After this ended in 2004, Claridge played for ten different clubs in a variety of leagues, never spending more than a season with one team. He has played at all levels of English football and has also appeared in 1000 professional or semi-professional football matches. This knowledge is almost unrivalled, Claridge’s experience in such diverse and varied environments in differing leagues and teams allows him to discuss the secrets to success and professionalism throughout football.

Trying his hand in management, Claridge took control of affairs at Portsmouth, Weymouth and Millwall during the early 2000s after enjoying an impressive playing career. An incredibly articulate football speaker, Steve Claridge is a man with a wealth of experience; he applies his knowledge and expertise to his roles within speaking, attending as an after dinner speaker as a recognisable football speaker.

Insightful and able to delve into the world of football at both ends of the spectrum, Claridge’s knowledge and expertise across non-league and the football-league is exceptional. Adding a new dimension to his role as a football speaker, Steve is able to elaborate on the regular struggles which come with non-league football and the constant battle to gain recognition and promotion to the football league.

A respected football pundit and regular on BBC television, Steve Claridge has worked as a pundit on Football Focus and The Football League Show, Claridge’s experience of the Football League has been used to position him as an expert at that level. A specialist football speaker, Steve Claridge’s presentation abilities expand his already impressive knowledge over the sport throughout his appearances and speaker duties is exceptional; articulate, approachable and relatable, Steve Claridge offers an in-depth insight into the world of professional football. Still active as a player, On 1 July 2017, the 51-year-old Claridge played for Salisbury and he remains a player-manager and director at the club. Having played for over 20 professional football teams, Steve Claridge has an abundance of knowledge and a whole host of tales and anecdotes to share with any audience. Steve Claridge is available to hire as a football speaker for any event or function and is certain to be a magnificent addition.

To book Steve Claridge to make a personal appearance at your corporate event, function or conference, simply contact the Champions Football Speakers agency by filling in our online contact form or by calling a booking agent directly on 0207 1010 553.