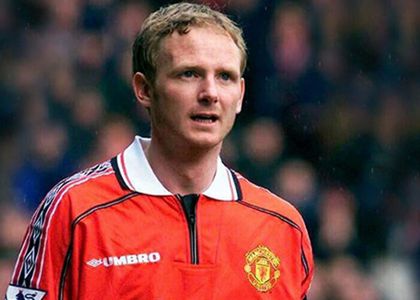 David May is a retired British footballer who now divides his time between coaching, working as a football speaker and building his wine business. Known for spending almost a decade with Manchester United, May remains a loyal fan and appears at many of United’s functions and at events as an after-dinner speaker.

Beginning his playing career at eighteen for Blackburn as a trainee before graduating to the first team in the 1988–89 season, mostly playing as a right-back but sometimes playing in the centre of defence. Making over 100 appearances for the club, May was a part of the team that achieved promotion to the new Premier League in 1992 before finishing for the year season and runners up toManchester United just two years after their promotion.

In 1994, in search of defenders, Manchester United signed May for £1.2million. In his first season at the club May was played out of his preferred position due to established players and partnerships that had already been established at the club. An agonising season for May culminated in him and United finished runners up in the Premier Leagueto May’s old team Blackburn Rovers. Silverware came May’s way in 1996 however as he was a part of the and Premier Leaguewinning side. Steve Bruce’s departure at the end of the season meant May would become a regular figure within the United line up.

May’s contributions were vital once again as United retained the Premier League title and also reached the semi-final of the UEFA Champions League. A promising and productive season for May and United resulted in an international call up for England. Injury struck for a number of seasons that followed meaning May spent a lot of his time on the sidelines and due to his lack of appearances, David collected only two Premier League winner's medals despite being a squad member for six winning campaigns. May is fondly remembered for the way he led the celebrations after the 1998-99 final that United won despite him not playing a single minute during the entire campaign.

Having his time at United cut short through injury, May proceeded to join Huddersfield Town on loan, a spell that lasted only game as he once again sustained an injury. Having been signed by Burnley on a free transfer David went on to play 39 times for Burnley during the 2003-04 season and also captained on a number of occasions. One final move to Bacap Borough where he would end his playing career before being appointed as assistant manager at the club. This managerial experience and a transition to life off the pitch would see May begin a coaching venture at a school in Dubai in 2007.

After his retirement May went on to establish himself as one of the most well-respected football speakers and currently works on the after-dinner speaker circuit; his experience as both player and manager have given him a wealth of insights into the inner workings of British football and many great stories and anecdotes from his time both on and off the pitch.

Further complimenting his work as a football speaker, David May has worked as a pundit and commentator for MUTV, Manchester United’s official channel, commenting on the techniques, tactics and performance of both Manchester United and their rivals.

Outside his work as a sports speaker David May has developed his own wine distribution business, making and selling his own brand of wine across the UK. May’s business management abilities only further compliment his work as a football speaker, giving him an intellect and ambition that is rarely seen in sports speakers. A fascinating speaker who enjoyed over a decade at one the world’s biggest clubs and played under possibly the best manager ever during a period filled with silverware, May would be an excellent football speaker at your event.

To book David May to make a personal appearance at your corporate event, function or conference, simply contact the Champions Football Speakers agency by filling in our online contact form or by calling a booking agent directly on 0207 1010 553.