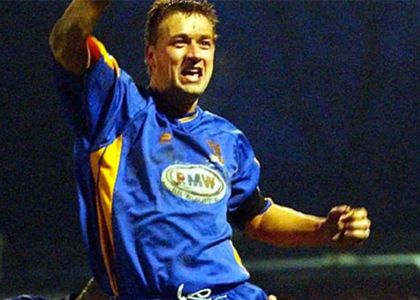 Nigel Jemson is an English former professional footballer who represented his country at under-21 level and was the player-manager of Ilkeston Town until May 2008. Jemson played for a total of 12 English league clubs, one Scottish league club and one Northern Irish league club during his career, rarely lasting more than a season at each club.
Beginning his career at Preston North End before moving to Nottingham Forest. Arguably, the highlight of his career was during his time at Forest where he scored the decisive and winning goal which resulted in winning the 1990 League Cup Final for Nottingham Forest. This particular moment in his career is something Jemson fondly reflects upon during his work as a football speaker.

Nigel Jemson then went on to have brief spells with Bolton Wanderers, Sheffield Wednesday and Notts Countyalong with a number of other clubs. In July 1996, Jemson joined Oxford United for a fee of £60,000. During his time there, he had loan spells with Watford, Coventry City and Rotherham United. In April 1996, Jemson scored both of Rotherham’s goals in a 2–1 win over Shrewsbury Town, for whom he later played 109 games, in the Football League Trophy Final at Wembley Stadium.

Jemson’s most recognised exploits of late came in 2003 where he gained national fame in, when he scored the Shrewsbury goals that knocked Everton out of the FA Cup third round. Nigel put the Shrews into a first-half lead with a free kick and, after Niclas Alexandersson had equalised for Everton, Jemson glanced a last-minute header past Everton keeper Richard Wright giving Shrewsbury a famous and extremely memorable giant-killing victory.

Jemson has turned much of his attention to working as a sports speaker, an ex-Nottingham Forest playerNigel Jemson has his own blog about the club and frequently works as a guest or after dinner speaker at club events. In 2010, he replaced Eoin Jess in the Nottingham Forest’s Masters team for the 2010 HKFC International Soccer Sevens tournament, another experience that allows Jemson to share a unique insight into another facet of football.

Nigel Jemson played for more than ten British league teams during his professional career, thanks to this unusual nature of his playing career, Nigel Jemson is unlike most football speakers working on the after dinner speaker circuit; his time spent at the various clubs provided him with a unique insight into the inner-workings of British football and the interplay between rival clubs.

As a football speaker, Nigel Jemson is enigmatic and captivating, he has a number of brilliant stories, surprising insights and hilarious anecdotes to share with his audience and his continued popularity amongst Nottingham and Nottinghamshire fans make him an excellent choice of football speaker for any local event where is football speaker is required.

To book Nigel Jemson to make a personal appearance at your corporate event, function or conference, simply contact the Champions Football Speakers agency by filling in our online contact form or by calling a booking agent directly on 0207 1010 553.