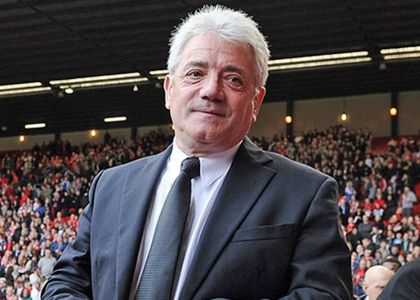 One of very few professional football players to have both captained and managed the English Football squad, Kevin Keegan is one of the best known names in football. A former European Cup winner with Liverpoolas well as a European Footballer of the Year, Kevin is knowledgeable in what it takes to consistently perform as well as become the very best in your field. These skills and attributes translate wonderfully across all audiences and make Kevin a highly desirable football speaker for both after dinner and keynote speakingopportunities.

Kevin Keegan began his career as a teenager at Scunthorpe United, his natural talent soon became evident and his creative style of play saw him move to Bill Shankly’s Liverpool Football Club. Almost instantly establishing a fruitful partnership with striker John Toshack, Kevin Keegan soon enjoyed a regular starting position within the squad. This role within the team would see Keegan go on to help the team win three First Division titles, two UEFA Cups, a FA Cup and a European Cup with Liverpool. Keegan left the club with 323 appearances and 100 goals across all competitions, before becoming the highest paid player in Germany, heading Hamburg’s strike force. At this point in time, Kevin had become one of the most influential players of the time, requiring him to deal with huge amounts of pressure and perform to the best of his ability as often as possible, something he relates well as a football speaker during after dinner events.

At the same time his club career was going from strength to strength, Kevin also became the England squad captain in 1976, a position he held until his international retirement in 1982. Keegan returned to England after playing in Germany, upon his return he represented both Southampton and Newcastle United. Retiring from playing football in 1984, Keegan pursued business and media ventures before eventually turning his hand tofootball management. His wealth of knowledge and understanding from his playing days along with his experiences meant that his initial spell in charge of Newcastle United saw a hugely close run battle with Manchester Untied for Premier League victory. After a few years with Fulham, Kevin Keegan took control of the England squad, proving to be an incredibly popular decision with the British public and press at the time. With a knowledge of business, media and leadership of one of the most well known teams in the world, Keegan has the ability to relate to all sectors allowing him to resonate with both corporate and sporting environments perfectly as a sports speaker.

Kevin returned to domestic management after the 2002 World Cup qualifying matches, dedicating himself to Manchester City and more recently to Newcastle Untied once more. After his announcement to retire from managing, Keegan has pursued a punditry career, becoming a frequent and popular pundit for both ITV and ESPN.

A true footballing icon, Kevin Keegan won the coveted Ballon d’Or on two occasions in consecutive seasons cementing his place as the best player in the world during that period. Inducted into the English Football Hall of Fame in 2002, Keegan has a wealth of knowledge about football and the fundamentals and requirements of success. A football personality who has relished and succeeded in all areas of the game and whatever venture he has embarked upon, Kevin Keegan is certain to be a highlight and tremendous addition to any event as a football speaker.

To book Kevin Keegan to make a personal appearance at your corporate event, function or conference, simply contact the Champions Football Speakers agency by filling in our online contact form or by calling a booking agent directly on 0207 1010 553.