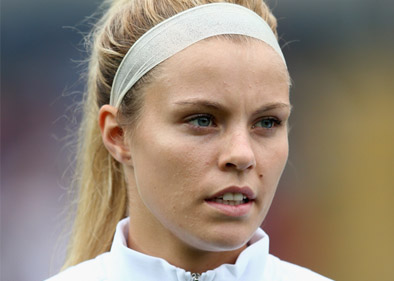 Rachel Daly is best known as a forward for the England National Team alongside playing for the Houston Dash in the National Women’s Soccer League. She has had extensive success individually at Houston Dash earning a number of individual honours.

Daly started her football career at Killinghall Nomads where she was noticed by Leeds United and invited to join the ladies’ Centre of Excellence from which she progressed from youth level up to the senior team. After moving to Lincoln ladies for a season, Rachel decided to further her education moving to the USA for college. After 3 years at St. John’s Red Storm in New York, she set her college’s records for both goals scored and points. She became the program’s first-ever player to be named an NSCAA All-American as well as the first to be named a semi-finalist for the Hermann Trophy. Selected by NWSL club Houston Dash in 2016 she went on to be named In the NWSL Team of the Month for March, May and July. This mirrored the rest of her club career as she went on to be voted team MVP, winning the Golden Boot at the NWSL Challenge Cup.

Rachel has played for England at the under 15, 17, 19 and 23 levels, she has represented the nation at the Under 17’s FIFA Women’s World Cup where they finished fourth in New Zealand in 2008. She won her first senior cap in 2016 scoring in a 7-0 win against Serbia. Called up to play in the England squad for the SheBelieves Cup in 2018 and 2019, she was part of the team that saw second place and victory against the United States in the final in 2019. More recently, Rachel was named in the squad that went on to be victorious at the UEFA Women’s Euro 2022, playing as a defender alongside Lucy Bronze under the watchful eye of Manager Sarina Wiegman. Following the team's success, they received the profound Inspiration Awards at the 2022 Pride Awards.

As a success both domestically and at the international level, Rachel is a loyal player for Houston Dash who consistently demonstrates her quality. Rachel Daley is available to book now through Champions Football. Get in contact today!

Book Rachel Daly to impress your guests at award ceremonies, product launches and sporting events today. To get in touch, simply call a member of our management team on 0207 1010 553 or fill out our online form.