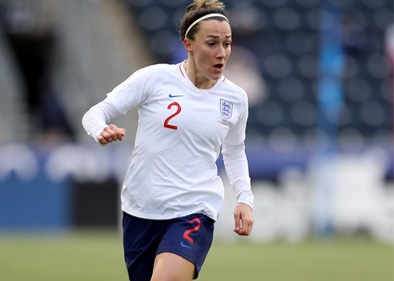 Highly skilled and successful English footballer, Lucy Bronze, plays for the French team Olympique Lyon as well as being the right back for the England Lionesses. Although predominantly a right back, Bronze is diverse in her position on the field as she can strongly play anywhere in defence or midfield. She has built an admirable career for herself, playing for multiple teams, including Manchester City, Barcelona, and England's national team since 2013.

Lucy began playing football in the under 11s team at Alnwick Town AFC. Developing her passion for football, she decided to study in the United States at the University of North Carolina, where she joined the North Carolina Tar Heels women's soccer team. In 2007, Lucy signed for her first senior team, Sunderland where she was named in their UEFA Women's Champions League squad. After her debut, her talent was recognised by clubs such as Everton and Liverpool which allowed her career to developing, leading to her current signing at Barcelona.

Recognised for her talent, Lucy was called into the England under-17 team in 2007. After proving her dedication to the England team, Lucy had her debut in 2013, against Japan at the Pirelli Stadium. Since her debut, she was a significant part of the England team that won the 2022 Women's Euros, playing as a defender alongside Rachel Daly. Her performance over the past 9 years has been recognised by many and she has been awarded multiple times throughout this period. In 2020, she was named the Best FIFA Women's Player and was also part of the UEFA Women's Team of the Decade. Following the team's success, they received the Inspiration Awards at the 2022 Pride Awards. In 2023, Lucy was appointed MBE for Services to Association Football in the New Year Honours 2023.

To book Lucy Bronze to make a personal appearance at your corporate event, function or conference, simply contact the Champions Football Speakers agency by filling in our online contact form or by calling a booking agent directly on 0207 1010 553.