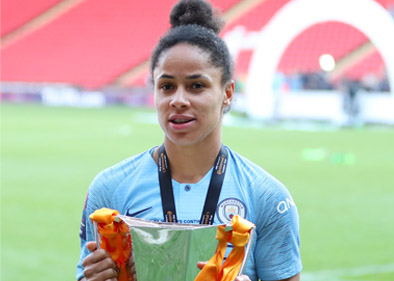 Demi Stokes is a skilled left back defender for the England Women’s National Team. She has previously played for Sunderland in the FA Women’s Premier League and is currently a defender for Manchester City WFC.

At the astonishingly young age of eight, Stokes joined the Sunderland Youth Academy, this gave her the opportunity to be part of the squad who won the 2008-09 FA Women’s Premier League Northern Division and made it to the final stage of the 2009 FA Women’s Cup. In 2011, she was offered a four-year scholarship by the University of South Florida. She accepted and played a total of 13 games for Vancouver Whitecaps in the pro-am North American USL W League, before signing a three-year professional contract with Manchester City.

Also with a successful international career, Stokes represented England in the Under 19, 20 and 23 squads. After winning the 2009 UEFA Women’s Under-19 Championship and participating in the 2010 FIFA U-20 Women’s World Cup, Demi was invited by newly-appointed England coach, Mark Sampson, to a 30-player squad for the annual training camp in La Manga. It was mid-way through the training, in 2014, when she won her first senior cap and participated in games such as Englands victorious 9-0 win against Montenegro at Falmer Stadium and the UEFA Women’s Euro 2017 qualifying campaign.

Stokes has also notoriously captained Team GB to triumph when they received a gold medal at the 2013 Summer Universiade in Kazan, Russia.

Book Demi Stokes to make a personal appearance at your corporate event, function or conference simply call a member of our management team on 0207 1010 553 or fill out our online form.