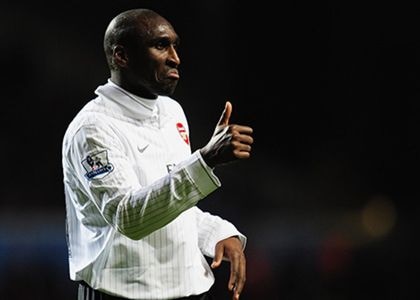 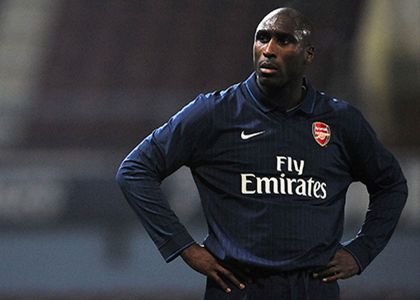 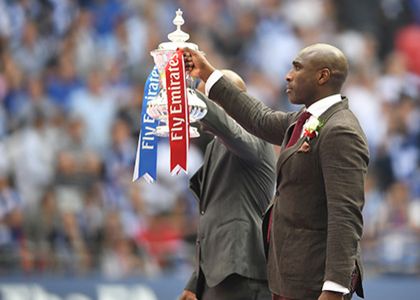 Sulzeer Jeremiah “Sol” Campbell is a retired English footballer, best known for his position as central defender in an illustrious career for Arsenal. The former captain of the England Squad. Sol Campbell has played for Tottenham Hotspur, Portsmouth and Newcastle United. Regarded as one of the best English centre-backs of his generation, Campbell was a strong, athletic and imposing defender. His fantastic positional sense along with his robust tackling ability coupled with Campbell’s height and physical power meant he excelled in the air, both offensively and defensively and was a force to be reckoned with. A magnificent football speaker with a wealth of knowledge, Sol Campbell is incredibly popular and sought after on the after dinner speaker circuit where he performs as a football speaker.

Born in East London to Jamaican parents, Sol Campbell began his playing career with Tottenham Hotspur in December 1992. Campbell spent nine years at White Hart Lane, scoring 10 goals in 255 appearances. Sol’s leadership skills shone along with his fantastic performances on the field, his role as an integral member of the team resulted in him being named captain. Sol captained the team to victory in the 1999 Football League Cup Final against Leicester City. In 2001, Campbell joined Tottenham’s North London rivals Arsenal on a free transfer, an act seen as utter betrayal in North London and as a result, Sol has remained a despised figure amongst Spurs supporters.

Following this incredibly controversial transfer, Sol Campbell spent five years at Arsenal and was pivotal in the club winning two Premier League titles and three FA Cup trophies encompassing the 2001–02 League and FA Cupdouble. A dominant and decorated period in Arsenal Football, Campbell was a part of the team that became known as The Invincibles for their undefeated 2003–04 Premier Leaguecampaign. Campbell is incredibly proud of his time and Arsenal and is a time he cherishes, his affection and pride shine through when he speaks of his time at Arsenal as a football speaker providing unique and captivating insights into the clubs tremendous success.

Campbell was also part of the side that agonisingly lost 2–1 to Barcelona in the 2006 UEFA Champions League Final, in which he scored the only goal for Arsenal. In August 2006, Sol joined Premier League side Portsmouth on a free transfer; his three years with the club included captaining them to success in the 2008 FA Cup Final against Championship side, Cardiff City. Following his time at Portsmouth which came to an end due to the club’s financial struggles, Campbell went on to play for Notts County before a dream return to Arsenal.

Campbell’s phenomenal domestic performances were rewarded as he gained his first full cap for the England national football team aged 21. In May 1998, aged 23 years 248 days, Campbell became what was then England’s second-youngest captain, after the legendary Bobby Moore. Campbell’s first goal for England came in the 2002 World Cup in the opening group game against Sweden and in 2006, Campbell became the only player to have represented England in six consecutive major tournaments, playing in the 1996, 2000 and 2004 European Championships and the 1998, 2002 and 2006 World Cups. Sol’s International career consisted of a total of 73 England caps, named in the official Teams of the Tournament for the 1998 and 2002 World Cups and 2004 European Championship.

One of a select few who have played over 500 Premier League games, Campbell’s experience and knowledge is quite spectacular, an incredibly accomplished career, Sol Campbell has a host of tales and anecdotes to share as he is available to hire for any event or function as a football speaker and is certain to be a fantastic addition.

When at corporate events, Sol is known to cover the following topics:

To book Sol Campbell to make a personal appearance at your corporate event, function or conference, simply contact the Champions Football Speakers agency by filling in our online contact form or by calling a booking agent directly on 0207 1010 553.