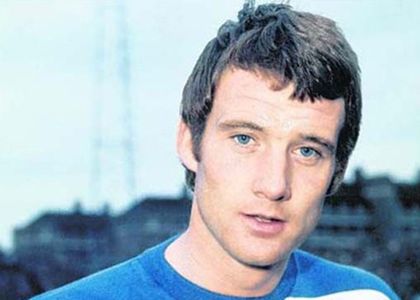 Rodney Marsh is a former English footballer and football coach, following his career Marsh has worked as abroadcaster and football speaker. A forward, Rodney Marsh won nine International caps for England between 1971 and 1973, scoring one international goal. Marsh is best known for his career at London clubs Fulhamand Queens Park Rangers as well as a brief spell at Manchester City and with American team, the Tampa Bay Rowdies.

Born in Hertfordshire, Marsh was brought up in the East end of London, he played youth football for West Ham United after he impressed at a trial which his father managed to get at the club following Rodney’s outstanding performances for Hackney Schools. With the Hammers Marsh was selected onto the academy however released after just 10 months. Marsh went on to sign for Fulham after impressing scout Bill Brown, he went on to make his professional debut with Fulham in March 1963. On his debut, Marsh scored the winning goal on his debut with a wonderful volley from a cross, prompting manager Bedford Jezzard to state that “No boy could have had a better first game.”

Tragically, In September 1963, he collided with John Sjoberg whilst in the process of scoring the winning goal against Leicester City and was ruled out of action for ten months with a broken jaw and skull. The incident had a chronic impact on Marsh, it left him with a permanent loss of hearing in his left ear and for weeks he was unable to keep his balance whilst standing along with agonisingly being told by one specialist that he would never play football again. Rodney Marsh speaks of this terrible event that took place at such an early stage in his career and the psychological strain it had upon him. He further elaborates on this by explaining his ability to deal with such adversity and the drive and determination required to deal with setbacks in life, lessons he talks of when he works as a football speaker.

Following this traumatic experience, Marsh signed for Queens Park Rangers, in his first full season at QPR, Marsh scored 44 goals in 53 games as the club became Third Division champions, Rodney’s 30 league goals made him the division’s top-scorer and he was also instrumental in QPR winning the League Cup that same season. It was in the final of the League Cup that Marsh scored what he described as “the defining goal of my career” when in the 75th minute he made a mazy run past numerous defenders before finding the net with a 25-yard shot that went in off the post. The following season once again saw a successive promotion as QPR finished second in the division and secured promotion to the First division, Marsh was again top-scorer with 14 goals despite missing the start of the season with a broken foot.

Following a couple of more successful goal scoring seasons for QPR and the appointment as captain, Marsh left the club to join Manchester City. City were four points clear at the top of the table when Marsh was signed, but by the end of the season they had slipped to fourth. Many pundits criticised the signing, pointing out that Marsh was a maverick player ill-suited to Allison’s well-drilled set-up, the huge pressure of such remarks are spoken of by Marsh when he performs as a football speaker and as he confessed in his autobiography, where he stated “Right, no beating about the bush, I have to hold my hands up – I cost Manchester City the 1972 league championship”.

Marsh retired from playing professional football in the late 1970’s after playing for a number of other clubs including spells in America and moved onto coaching, where he had a successful career as coach for his previous team the Tampa Bay Rowdies as well as other American teams such as New York United and Carolina Lightenin’. Since leaving the coaching profession in 1986, Rodney Marsh has gone on to work as a media pundit and football speaker for a number of high profile broadcasters, a feature on Sky Sports series Soccer Saturday, Marsh is known for his loud personality and the amiable mockery he shared with fans, fellow sports speakers and pundits. In particular he will be remembered for his antics during the 1999/2000 season, he bet Bradford City fans that if they avoided relegation he would shave his head! This is fondly spoken of during his performances as a football speaker where Marsh is always incredibly charming and engaging proving to be a wonderful addition to a host of events and functions.

Since leaving Sky Sports, Rodney Marsh continues to work as a football speaker at a host of events along with building a name for himself as a reality TV star, Rodney has appeared on a number of reality TV series including I’m A Celebrity, Get Me Out of Here and Celebrity Come Dine With Me, further increasing his popularity within the media and public domain.

The former England International player and media personality Rodney Marsh is available to hire for any event as a football speaker and is certain to be a fantastic addition to any event or function as a football speaker where he reminisces on a diverse career reflecting upon a host of tales and anecdotes while eloquently sharing his wealth of knowledge.

When at corporate events, Rodney is known to cover the following topics:

To book Rodney Marsh to make a personal appearance at your corporate event, function or conference, simply contact the Champions Football Speakers agency by filling in our online contact form or by calling a booking agent directly on 0207 1010 553.