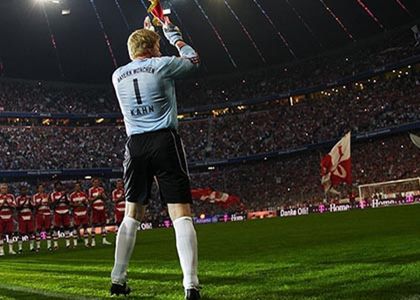 Oliver Kahn is a former German football goalkeeper, his individual contributions throughout a decorated career have earned him four consecutive UEFA Best European Goalkeeper awards, three IFFHS World´s Best Goalkeeper awards, and two German Footballer of the Year trophies. At the 2002 FIFA World Cup, Kahn became the first and only goalkeeper in the tournament´s history to win the Golden Ball.

Kahn is one of the most successful German players in recent history, having won eight German championships, six German cups, the UEFA Cup, the UEFA Champions League and the Intercontinental Cup. From 1994 to 2006, Kahn was part of the German national team and the first choice goalkeeper. In the 2002 FIFA World Cup, the team reached the Finals. While the team was several times derided for their poor performance, Kahn´s prowess proved to be the deciding factor in several games leading up to the final, where Germany lost to Brazil 0–2, nonetheless, he was named the tournament´s best player and received the Golden Ball award.

At the age of six, Kahn joined Karlsruher SC, where his father Rolf had played from 1962 to 1965. Starting his career as an outfield player before becoming goalkeeper, Kahn was included in the team’s professional squad in the 1987–88 season of the first Bundesliga division. Oliver Kahn eventually established himself as the team’s starting goalkeeper. He was considered a key player and motivator in the Karlsruher squad which reached the semi-finals in the 1993–94 UEFA Cup.

Kahn’s performances for Karlsruher SC prompted Bayern Munich to express interest in acquiring him before completely the transfer for the then record fee of DM4.6 million (€2.385 million) for his position, and Kahn was immediately established as Bayern’s starting goalkeeper. An incredibly successful career for Bayern Munich followed, Oliver Kahn made 429 appearances for the club which yielded a incredibly 24 trophies with a combination of both domestic and European titles. Kahn’s phenomenal performances were integral to Bayern’s success and his leadership qualities catapulted the club to become a major force within world football. Voted the Best Bundesliga Keeper on 7 occasions through his career, Oliver Kahn has the experience and expertise to bring tremendous value to any event where he is a football speaker sharing his knowledge of football, success and leadership.

Internationally, Oliver Kahn will forever be remembered as one of the greatest goalkeepers in Germany’s history receiving 86 caps, 49 of which he was captain. A vital figure within the team, Kahn captained his country and was a formidable force. Following the 2002 FIFA World Cup, arguably the pinnacle of his individual International career, the FIFA Technical Study Group awarded him with the Lev Yashin Award for the best goalkeeper of the tournament, and became the first goalkeeper in history to win the Golden Ball for the best individual performance. He also became the first German goalkeeper to keep five clean sheets in a World Cuptournament and Kahn maintained his number one spot for the 2004 UEFA European Football Championship.

Following his playing career, Kahn has often been a TV personality and pundit appearing for ZDF Sports Teamas an analyst for the German National teams. In 2015, the arcade game company Konami announced that Kahn would feature in their football video game Pro Evolution Soccer 2016 as one of the new myClub Legends, a testament to his prowess as a player.

Regarded as one of the greatest and most successful goalkeepers of all-time, Oliver Kahn is a charming and charismatic personality with a wealth of knowledge, his incredible knowledge of the game coupled with his leadership and motivational qualities make him an incredibly sought after figure on the football speaker circuit. Oliver Kahn in certain to provide a fantastically informative and captivating performance as any event as a football speaker.

To book Oliver Kahn to make a personal appearance at your corporate event, function or conference, simply contact the Champions Football Speakers agency by filling in our online contact form or by calling a booking agent directly on 0207 1010 553.