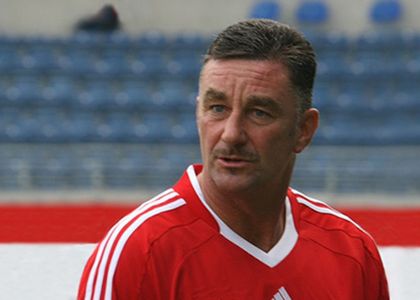 A prolific and record-breaking striker, John Aldridge enjoyed a career in professional football as both a player and manager. Known for his successful spell at Liverpool FC in the late 1980s, John tallied a total of 330 league goals during his career, the sixth highest in history. A terrific football speaker, John is passionate about his sport as well as trying to teach others how to achieve the most they can.

Beginning his professional career at Newport County, ‘Aldo’, as he became affectionately known, played 198 times for the team, scoring a commendable 87 times for the squad. After a further three years with Oxford United, John caught the attention of England’s leading club and this interest transpired in him being signed by Kenny Dalglish for Liverpool FC for a fee of £750,000 in 1987. Becoming partners with Rush, Aldridge immediately made an impact and became an important figure within the team. With the additions of Beardsley and Barnes in later years, Aldridge formed part of one of the most exciting strike forces in the nation. Discussing the trial and tribulations of top-flight football as a football speaker, John compels audiences and is sure to make your event a success, qualities that make John a leading after dinner speaker.

Involved in the tragic and horrific event in which 96 Liverpool away fans were crushed to death in the Hillsborough disaster of 15 April 1989 during an FA Cup tie held in Sheffield against Nottingham Forest, Aldridge, as a native Liverpudlian and boyhood supporter of the club, was deeply affected by the tragedy. He attended every funeral he could and publicly contemplated giving up the game. Aldridge speaks of the emotions and tragedy surrounding the traumatic incident during his speeches as a football speaker.

Playing for teams including Real Sociedad where he became the first non-Basque player to sign for Sociedad in several decades as they abandoned a selective recruitment policy and Tranmere Rovers after his career at Liverpool where he repaid the bargain price of £250,000 that Tranmere paid for him as he scored a club-record 40 goals in his first season at Prenton Park, Aldridge proved to be a hugely reliable and skilful player all the way up to retirement, which came in 1998 after two years as player-manager at Tranmere. Aldridge’s playing career had spanned almost two decades including playing for his home nation, Ireland, sixty-nine times.

After his playing career, John managed Tranmere Rovers for a further three years whilst establishing a successful career in broadcasting and punditry. A regular on radio stations such as Radio City 96.7, John shares his insightful knowledge of the game with thousands of loyal fans. Aldridge’s knowledge of management and leadership also allow him to eloquently attract with audiences and provide them with invaluable information and insights into man management that is applicable to football, life and business.

In 2006, he gained media celebrity status in Ireland by appearing in RTÉ’s Charity You’re A Star competition. Despite not having a natural singing voice, Aldridge won the competition and in the process raised money for his nominated charity Temple Street Children’s Hospital.  Aldridge is a regular contributor to match analysis and phone-in shows on LFC TV and a patron of A.F.C. Liverpool, a non-league football club set up by Liverpool F.C. fans in 2008.

To book John Aldridge to make a personal appearance at your corporate event, function or conference, simply contact the Champions Football Speakers agency by filling in our online contact form or by calling a booking agent directly on 0207 1010 553.