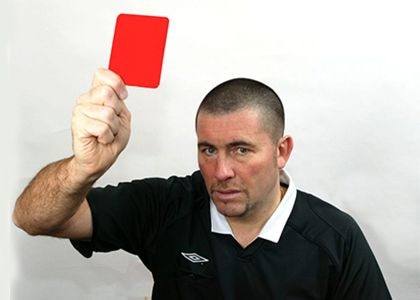 British referee Jeff Winter retired from Premiership football in 2004 and has made a successful career as a football speaker working for the sporting and corporate event circuit.

Before embarking on his new football speaker career Winters was one of the most controversial referee’s in England, born in Manchester, Winter’s last match as a Premiership referee was the FA Cup Final between Manchester United and Millwall. As a football speaker Winter discusses the many situations and incidents he found himself caught in the middle of during his refereeing career. Winter’s biography, Who’s The B****** in the Black?, also covers many of the same stories he shares as a football speaker, however, unlike some other sports speakers, Winter offers more than locker room gossip; his work as a football  speaker is founded upon the management and negotiation of difficult situations. As a referee, Winter inevitably found himself caught between opposing sides however, his ability to understand potentially complex situations and deal with the fall out of potentially upsetting one team over another marks Winter as a clear and astute thinker.

Since 2006, Winter has officiated in the annual series of the national six-a-side tournament called Masters Football, referees for which are FA endorsed. The competition features ex-professional footballers chosen by the PFA, and is televised on Sky Sports. Winter also appeared as an official on the BBC TV programme Superstars, experiences he sheds light on during his work as a football speaker providing an insight into the commercial world of football and how media has changed both the game and the lives of people within the sport. Supporting Middlesbrough F.C., it is rumoured that Roberts was due to officiate in the 2004 Football League Cup Final only to be ruled out due to Middlesbrough appearing in the final against Bolton Wanderers so was instead present at the game as a fan.

Winter prides himself on ensuring that all his work as a football speaker is both insightful and interesting, his strong personality and wealth of experience make him an excellent choice for corporate events whilst his personal involvement in charity work – which has extended beyond his professional career to refereeing charity football matches – makes him an excellent football speaker at fundraising events.

Outside his work as a football speaker Winter contributes to several columns as a sports journalist for both local and national newspapers, he also spent several years working for a local Teeside radio station, TFM Radio. Since breaking ties with the Football Association, Jeff is available to speak about his experiences with true candidness, his dealings with the most controversial and volatile players along with his experience of the management elite. Winter has an array of amusing tales and anecdotes to share along with a host of motivating moments you can enjoy by hiring Jeff as a football speaker.

Jeff Winter is certain to provide a hugely entertaining and humorous performance at any event as a football speaker sharing the most amusing stories and insights into his career while providing an understanding of personalities in football behind closed doors in the hugely controversial and scrutinised world of a football referee. Winter is the perfect football speaker for any event.

To book Jeff Winter to make a personal appearance at your corporate event, function or conference, simply contact the Champions Football Speakers agency by filling in our online contact form or by calling a booking agent directly on 0207 1010 553.