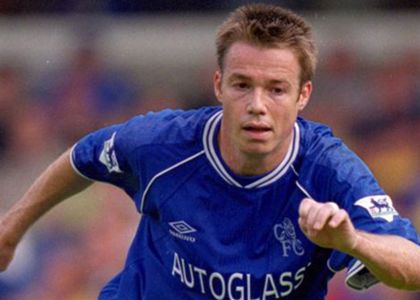 Born in Jersey and of French descent Le Saux is one of the most intelligent footballers of recent years; known for his university education and liberal views, Le Saux has spoken out against prejudice and homophobia within the football industry and, in his capacity as both a football speaker and a celebrity, is heralded for speaking out against the homophobic behaviour of his fellow footballers.

Le Saux started his career at St Paul's of Jersey before moving to Chelsea in 1987 after being spotted playing in a local tournament by manager John Hollins. He made his debut for the club two years later against Portsmouth and had become a regular by the 1990–91 season. His first stint at Chelsea ended in controversy, though. Angry at continually being substituted, he snapped when he was subbed again during a match with Southampton and threw his shirt to the ground as he stormed past manager Ian Porterfield. He was sold to Blackburn Rovers in March 1993 for £700,000. This event is one often brought up in Le Saux's after dinner speeches as he looks back upon the incident with a real sense of humour.

Blackburn desire to establish the club as one of the country's top sides meant Le Saux joined an impressive side containing the likes of Alan Shearer and Tim Flowers. Finishing second in Le Saux's first full season, and being crowned Premier League champions a year later, meant Blackburn Rovers began to achieve their ambitions with Le Saux a near ever-present figure within the team.

Le Saux became the most expensive defender in English football when he returned to Chelsea in a £5 million deal. Always a regular when available, Le Saux's second spell with Chelsea was often interrupted by injury or suspension. He remained there for six seasons, and was an important part of the side which won the League Cup and Cup Winners' Cup in 1998 and the FA Cup in 2000.

A brief spell with Southampton was Le Saux's last real tenure within football however he along with many ex-professionals, came out of retirement to play for Wembley F.C.in an attempt to lead the club to play at Wembley Stadium. Le Saux was capped 36 times for England making his first appearance in a friendly win over Denmark and played at the 1998 World Cup, appearing in every game as England reached the second round.

With a playing career that spans more than three decades Graeme Le Saux has an impressive collection of stories and anecdotes to share with audiences in his capacity as a football speaker at various events.

Outside his work as an event guest and football speaker, Graeme Le Saux is an established football speaker and pundit having worked for several years for the BBC on both their Match of the Day 2 programme and on Radio 5 Live. Graeme has since moved to working as the football speaker and commentator for the American based NBC production company. Outside his work as a sports speaker Graeme Le Saux has appeared on a number of reality TV series and game shows, his charming and amiable personality making him a much-loved guest and public figure.

A long and illustrious career, Graeme Le Saux has enjoyed a wide array of experiences and possesses a wonderful knowledge of the game along with a true understanding of how difficult life in the spotlight can be and how unforgiving people can be. All of these experiences only add to Le Saux's repertoire as a football speaker and make him a truly intriguing and compelling speaker at any event and his phenomenally eloquent and intelligent delivery only add to his prowess as a football speaker.

To book Graeme Le Saux to make a personal appearance at your corporate event, function or conference, simply contact the Champions Football Speakers agency by filling in our online contact form or by calling a booking agent directly on 0207 1010 553.