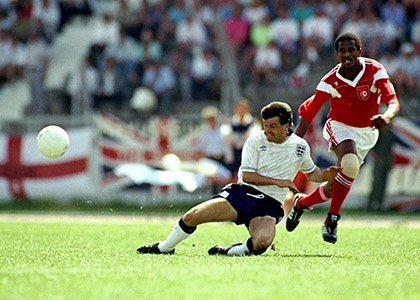 Steve Hodge is a retired English footballer who enjoyed a high-profile club and international career in the 1980s and 1990s. Hodge played for a variety of English clubs as well as work as a manager and England International. An autobiography entitled, The Man With Maradona’s Shirt, Steve Hodge is now working as a football speaker sharing a host of tales and anecdotes from his career in football.

Beginning his senior playing career in 1980, Hodge played for almost over tow decades at a range of clubs including two spells at Nottingham Forest. With a total of eight years spent at Nottingham Forest, Steve Hodge remains one of the clubs most well respected players, despite the fact he now works as a development coach and caretaker manager for the team’s local rivals Notts County. Hodge’s time at Forest yielded a 1989 season double in the shape of a Football Members Cup and the Football League Cup. The following season, Hodge and the team went on to retain the Football League Cup and Steve was named in the Football League First Division PFA Team of the Year for the season as a result of his monumental performances. The 1982-83 Nottingham Forest F.C. Player of the Year, Hodge is renowned and revered by fans across Nottingham for his phenomenal contributions.

Retiring in 1998 Steve Hodge as gone on to work as a manager, coach and sports speaker. Alongside his work as a coach, Hodge has also cultivated a prolific career as a sports speaker, appearing at specialist sporting events, corporate functions and as an after dinner speaker at both Nottingham Forest and Notts County.

Known as a left footed goal scorer on the pitch and as a charismatic football speaker off it, Steve Hodge was popular with Nottingham Forest fans and had played for the team as a child. It came as a surprise to many when Forest accepted a transfer bid of £450,000 for Hodge from Aston Villa in 1985. Less than three years later however Hodge would return to Forest and his former glory.

Above all else however Hodge is remembered by most football fans for his part in the fateful 1984 World Cup game against Argentina when Diego Maradona and fellow British East Midlands compatriot and football speaker, Peter Shilton OBE challenged for the ball culminating in an allowed hand ball goal from Maradona which knocked England out of the competition and was notoriously known as The Hand of God.

As a football speaker, Steve Hodge continues to speak bitterly about the Hand of God incident and though he would go on to have a number of successes in his club career the incident would forever over shadow his career. Filled with a host of tales and anecdotes from an incredibly diverse career, Steve Hodge is available to hire as a football speaker for any event or function and is not only certain to be a fantastic addition but also provide a thoroughly entertaining and informative event.

To book Steve Hodge to make a personal appearance at your corporate event, function or conference, simply contact the Champions Football Speakers agency by filling in our online contact form or by calling a booking agent directly on 0207 1010 553.