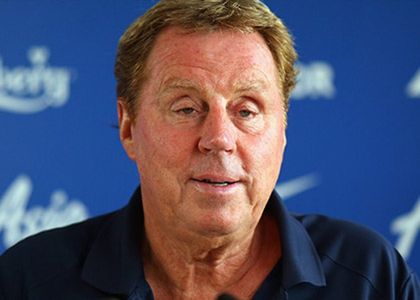 An extremely motivational football speaker, Harry Redknapp is an English football manager with experience managing some of Britain's most famous teams. Having seen success at a variety of different levels and clubs, Redknapp makes the perfect addition to any corporate event or function, where he is frequently known to cover sporting success, drive and determination and many other topics.

During his playing career, Redknapp played as a midfielder where he began his career with Tottenham Hotspur, playing for the youth team until he was 15 years old before he moved to West Ham United. He made 175 total appearances in both league and cup action for West Ham, scoring eight times over seven seasons before he moved to AFC Bournemouth. Redknapp made 101 appearances for the club scoring 5 goals before relegation cited a move to Brentford. Harry's playing career then took him to America where he signed for Seattle Sounders in the North American Soccer League as a player coach.

Retiring in the late 1970’s Redknapp went on to manage both West Ham and Bournemouth as well as a period spent at Southampton and two terms at Portsmouth; his dedication to British football has only increased over the years and, in his capacity as a football speaker, Redknapp highlights the importance of home-grown talent and the potential of the British youth; and with a son, a grandson and a nephew all proud English footballers (Jamie Redknapp, who played for Liverpool for 11 years, Harry Redknapp Jr who signed for AFC Bournemouth in 2014 and Chelsea legend, Frank Lampard.

Alongside his work as a football speaker and Premier League manager Redknapp has held dreams of managing the England international team, but was pit to the post by Roy Hodgson in 2012 amidst erroneous allegations of corruption and fraud. His ability to remain a dedicated and competent manager throughout the various trials and tribulations of his public image only further attests to his determination and ambition which shine through at events when Redknapp performs as a football speaker.

Redknapp's illustrious managerial career really began during the 1982–83 season, Redknapp took up his first major coaching role as assistant manager to David Webb at AFC Bournemouth, six years after leaving the club as a player. In October 1983 Redknapp was appointed manager of the club. In his first season at the helm, Redknapp helped Bournemouth avoid relegation to the Fourth Division. Bournemouth also caused a shock in the FA Cup when they defeated holders Manchester United. Bournemouth won the Third Division title in 1987 with 97 points, breaking the club's record for the most points accumulated in a season.

Following a tragic accident in Rome where Redknapp narrowly escaped death, he left Bournemouth and the next season, Redknapp was appointed assistant manager to Billy Bonds at West Ham United, another of his former clubs. However, in August 1994, the club board of directors opted to turn control of the team over to Redknapp. Redknapp helped to establish the club in the FA Premier League and introduced a number of young players from the club's academy, including Michael Carrick, Joe Cole, Rio Ferdinand and Frank Lampard. In 1999, which saw them qualify for the UEFA Intertoto Cup in what was their second-best ever season in the top division. In the 1999–2000 season, West Ham won the Intertoto Cup and qualified for the UEFA Cup, an achievement Redknapp talks about fondly as a football speaker.

Redknapp became director of football for Portsmouth in 2001, before taking over as manager in 2002 helping the team gain promotion to the Premier League. He guided the club to their first FA Cup Final in 69 years, where they defeated Cardiff City on 17 May 2008 to win The FA Cup 1–0 becoming the last English manager to win a major English trophy. Redknapp returned to Portsmouth to receive the Freedom of the City in a ceremony on 28 October 2008. As this event took place two days after his departure for Tottenham Hotspur, he received a mixed reception from the Portsmouth fans, despite having led the club to a long-awaited trophy in the 2008 FA Cup. After a successful campaign in charge at Tottenham Hotspur in which Redknapp led the club to the UEFA Champions League culminating in Redknapp being named Premier League Manager of the Year. Redknapp went on to manage Queens Park Rangers, Jordan and Birmingham City.

In a truly impressive and diverse career, Redknapp has experienced successes and trials within life in football and has continued to command the greatest respect in the footballing world as well as being a hugely demanded manager, personality and football speaker. As a football speaker, Redknapp is passionate and enthusiastic, his vast experience as both a player and sports speaker have provided him with an in-depth knowledge of football, tactics and teamwork, all of which compliment his work as a football speaker. His insight into life both on and off the pitch is incredibly enlightening, whilst, thanks to the peaks and troughs of his long-standing career, Harry Redknapp speaks openly about adversity, determination and ambition as a man who has faced and experienced both.

To book Harry Redknapp to make a personal appearance at your corporate event, function or conference, simply contact the Champions Football Speakers agency by filling in our online contact form or by calling a booking agent directly on 0207 1010 553.