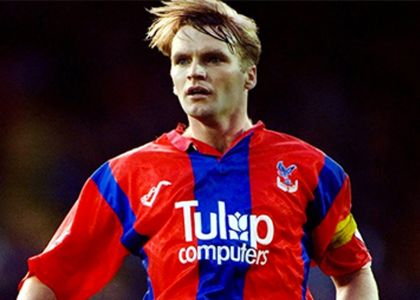 Manchester born football speaker and former England player Geoff Thomas is best known for his successful career at Crystal Palace during the 1980’s and early ‘90’s where he found himself part of the most successful Palace team to date, when in 1991 they finished third place in the top-flight league of the era. Retiring in 2002 Geoff has gone on to work as a sports speaker at a variety of sporting and club events. As well as working as a football speaker and player on the domestic circuit, Geoff Thomas also gained 9 caps for the English national team after his debut in 1991 when he was picked by England coach and former sports speaker Graham Taylor for the European Championships Qualifier.

Making the leap into professional football from a steady job as an electrician Geoff Thomas began following his dream in 1982 when he signed for Rochdale, however he only truly began to flourish several years later when he was signed by Crewe Alexandra manager and fellow football speaker Dario Gradi in 1984. A popular player at Gresty Road Thomas began to find his feet at Crewe and honed his tackling and attacking skills with the club quickly becoming a favourite among fans. After three years at Crewe Geoff moved to Crystal Palace where he remained for six years, Thomas made an instant impact as he was named Supporters Player of the Year after his first season at Selhurst Park before helping his side to promotion to the top flight in his second year at the club.

During his third year at the club Thomas enjoyed top flight football for the first time in his career and went on to captain his team to the 1990 FA Cup Final at Wembley Stadium where his team agonisingly lost in a close fought replay against Manchester United. Perhaps his crowning glory of his career was the 1990-91 season when he was an integral part of the Palace squad that finished third in the top flight, the club’s best ever finishing position topped off by Thomas being named Supporters’ Player of the Year once again. These performances and another successful season did not go unnoticed as Thomas was handed his first full International cap, the first of his nine caps for England.

Crystal Palace were eventually relegated from the Premier League in 1993 upon which Geoff Thomas left for Wolverhampton Wanderers after 249 appearances for Crystal Palace , however, his career at Wolves and subsequent clubs Nottingham Forest and Barnsley were overshadowed by injuries and Thomas eventually returned to Crewe Alexandra in 2001 where he was unable to prevent yet another team from being relegated.

Geoff Thomas retired as a professional football player in 2002 after returning to Crewe Alexandra where he played the final 17 games in his career, fittingly scoring in his appearance. The following year Thomas revealed that he had been diagnosed with leukaemia; determined to beat the illness, Geoff went on to take part in a number of charity fundraising events including completing the Tour de France route, a full 2,200 miles in 21 days, raising £150,000 for Leukaemia Research Foundation. Geoff has continued to work as a fundraiser and after dinner speaker for the charity and has established his own trust, the Geoff Thomas Foundation in 2014.

As well as working as a football speaker, Geoff Thomas has taken part in a number of cycling tournaments as well as publishing his own autobiography: Riding the Storm. His incredible recovery in which he managed to overcome Leukaemia resulted in Thomas being awarded the BBC Sports Personality of the Year Helen Rollason Award in 2005 after he raised over £150,000 from his cycling explots before the 2005 Tour de France.

Voted in the Crystal Palace Centenary XI and being given a Special Achievement Award for his services to the club as captain in 2008, Geoff Thomas has experienced a fascinating journey through life and football overcoming adversity and struggles, times he eloquently portrays in his delivery as a football speaker. His huge footballing talents and his glorious years at the height of his career also make for a wonderful insight into the game of football. A truly rare perspective of a gentleman’s life through living his dream and then overcoming the harshest of realities and circumstances make for an incredibly gripping, inspirational and moving performance a football speaker at any event.

To book Geoff Thomas to make a personal appearance at your corporate event, function or conference, simply contact the Champions Football Speakers agency by filling in our online contact form or by calling a booking agent directly on 0207 1010 553.