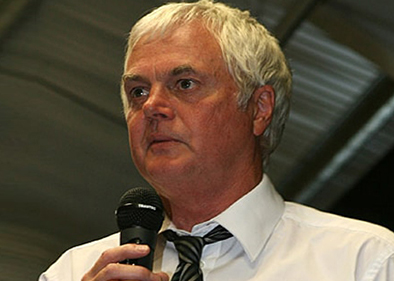 Ex-Professional footballer Duncan McKenzie enjoyed a fruitful career with stints across England, Belgium, America and Hong Kong as a hard-working goal scorer. Now retired and working within the after-dinner circuit as a football speaker, McKenzie was involved in a 14-year career which concluded in 1983 after 390 appearances and over 130 goals for 10 different clubs- most recognisably Nottingham Forest during the Brian Clough era eventually following him to Leeds United. An articulate after dinner speaker and event attendee, McKenzie is as popular as ever.

Striking fear into defenders thanks to his supreme talents, his ferocious speed and prolific goal scoring capabilities, McKenzie tasted International domestic football plying his trade for Belgium team Anderlecht, Tulsa Roughnecks of American and finishing his playing days with Ryoden FC in Hong Kong. An experienced sports speaker with the background to match, Duncan McKenzie’s career has ensured his legacy as a football speaker is an exceptional one.

Having started his career with Nottingham Forest, he was loaned to Mansfield Town in exchange for emergency goalkeeper Dave Hollins. He did not establish himself in the team until the 1973–74 season, when he hit a tremendous spell of good form, scoring 26 goals in the season. McKenzie was signed for Leeds United by Brian Clough during his 44-day reign as manager of Leeds, and was the only one of his signings to subsequently flourish at the club. Initially, he attracted media attention for his achievements outside of the game, which included the ability to jump over a Mini and to throw a golf ball the length of a football pitch. However, once established in the Leeds side, he soon attracted attention for the quality of his footballing skills.

McKenzie was a sublimely talented individual, capable of running rings around the most astute of defenders. However, despite his skills, he could be an immensely frustrating player to play with; whilst he reserved his finest moments for big games, he was often anonymous against lesser opposition. It was this inconsistency that caused him to be sold to Belgian side Anderlecht at the end of the 1975–76 season, but he returned to England in December 1976 when he signed for Everton.

In September 1978, Duncan joined Chelsea where much like the rest of his career, he dazzled the fans with his skills and eccentricity but still failed to make the most of his talents. He left the club less than a year later having made just 16 appearances and scored four goals. Moving to Blackburn Rovers and helped the club to promotion from the third division in 1980. Thereafter McKenzie began his travels to play for a number of teams in destinations around the world.

Now working as an after-dinner speaker along with roles within BBC Radio Five’s 6-0-6 program and immersing himself as a newspaper columnist, McKenzie’s delivery as an after-dinner speaker summarising his story and career across football. His talents as a football speaker are clear to be seen and heard, with McKenzie thriving throughout his appearances; a popular after dinner guest and event speaker, undoubtedly McKenzie’s experiences as a football speaker will add a new dimension to any event or occasion.

A personality who has attracted media attention for his achievements outside of the game, which included the ability to jump over a Mini and to throw a golf ball the length of a football pitch, both incredibly impressive feats, Duncan McKenzie truly is a marvellously talented individual and an intriguing and compelling football speaker.

To book Duncan McKenzie to make a personal appearance at your corporate event, function or conference, simply contact the Champions Football Speakers agency by filling in our online contact form or by calling a booking agent directly on 0207 1010 553.