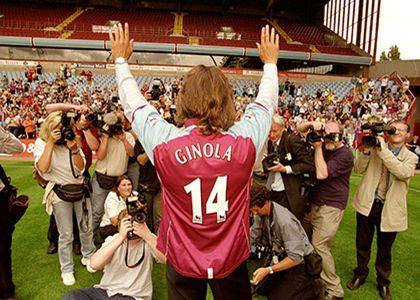 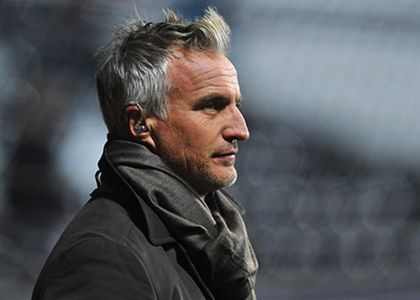 French footballing heart throb, David Ginola enjoyed a prolific career throughout the 1990s, eventually representing 8 different teams across both the French and English leagues. A Former actor and model, Ginola also made 17 international appearances finding the back of the net on 3 occasions. Retiring in 2002 after amassing an impressive 503 career caps and 81 goals, Ginola is a regular contributor across a range of television networks as well as being an after-dinner speaker and football speaker.

Beginning his career at Sporting Toulon as an 18-year-old where he soon became a regular fixture within the team before he moved to Racing Club Paris in 1988 where he remained for a couple of seasons before a transfer to Brest. In was during his time with Brest that Ginola’s extravagant style of play began to catch the eyes of many especially that of Paris Saint-German against whom Ginola put in a mouth-watering performance that was crucial to his sides victory. He soon after became a PSG player.

Ginola did not take long to win over fans at Parc des Princes with his attractive and elegant style of play along with the electrifying pace he possessed. His first full season brought a Coupe de France trophy and a UEFA Cup semi-final. At the end of 1993, he was also won the French Footballer of the Year award from the France Football magazine. 1993–94 would turn out to be the best season of his career, Ginola was shining with his club. A star-studded Paris Saint-Germain side won the second league title of its history, losing only three times along the way. Ginola played an important role in this title-winning campaign, providing 13 goals in 38 games, which made him the leading club goalscorer for the season.

In 1995 Ginola headed to England to play in the Premier League, here he would play for Newcastle United, Tottenham Hotspur, Aston Villa and finally Everton. His fondest memory in English football came at Spurs where he was a major part of the 1999 League Cup winning team during a season where he was name playerof the year, the only player ever to receive the accolade playing for a team finishing outside of the top 4. Ginola was a very prominent member of France team although he only played 17 games and was named player of the tournament as a junior playing for France U21s in the FIFA World Cup, a tournament the nation won.

A prolific winger notorious for his flamboyant playing style, David Ginola was regarded as one of the best players in the world by Johan Cruijff in 1999; once retirement beckoned Ginola turned his attentions to acting, making a number of appearances across French television, including a few cameo roles on British networks. The PFA Players’ Player of the Year for the 1998-99 season, Ginola is currently the only player to win the award in both England and his native home of France, claiming the French award in 1993. A truly prolific footballing track record has set David Ginola in good stead for a promising career as an after-dinner speaker, proving especially successful as a football speaker.

His ability as a sports speaker has been heightened due to his charismatic persona and personality; well known for his charming and smooth approach, David Ginola is a firm favourite with the public. His addition to any event or occasion as a speaker is sure to guarantee its success and will make it an impressive night for all.

His punditry experience in which he has worked for BBC, BT Sport, Canal Plus, CNN and TalkSport along with his acting pursuits in films such as Operation Matchbox add to his already distinguished repertoire of presentation skills. An effortless and confident speaker, David Ginola has participated in many charity pursuits and in an abundance of endorsement opportunities making him incredibly sought after and re-emphasising him as the perfect after dinner speaker and football speaker for your event.

When he's at corporate events, David is known to cover the following topics:

To book David Ginola to make a personal appearance at your corporate event, function or conference, simply contact the Champions Football Speakers agency by filling in our online contact form or by calling a booking agent directly on 0207 1010 553.