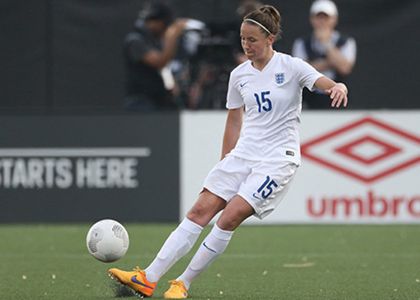 Casey Stoney MBE is an English footballer who is best known for captaining both England and Team GB at the London 2012 Olympic Games. Currently playing for Liverpool Football Club, Stoney is a versatile defender and has been capped more than 100 times for the England women’s national football team after making her debut in 2000. Casey was an integral part of the England team’s which reached the UEFA Women’s Euro 2009 final and the quarter finals of the FIFA Women’s World Cup in 2007 and 2011. A highly decorated and illustrious career that continues to flourish, Casey Stoney draws large crowds and attention during her work as a football speaker.

Stoney joined Chelsea Ladies at the age of 12 before moving to Arsenal Ladies in 1999. Following three season with the London club, Stoney was already an England international when she joined Charlton Athletic Ladies in the summer of 2002 in search of regular first-team football. Along with her transfer, Stoney also took up a scholarship at The Football Association’s National Player Development Centre at Loughborough University. In a successful first season, Stoney’s leadership qualities were instantly recognised and capitalised on as she captained Charlton to their first FA Women’s Cup final and making an instant impact.

The following few seasons saw an extremely fruitful time for both Stoney and her team as she led Charlton Ladies to success in the FA Women’s Premier League Cup in 2004, the FA Women’s Cup and to a 2–1 victory over Arsenal Ladies in the 2006 Premier League Cup. Following the relegation of Charlton Athletic men’s team in 2007, Charlton disbanded their entire women’s section despite their incredible success, unsurprisingly Casey Stoney was incredibly frustrated by the decision. In a statement she said ‘I’m disgusted with the club – the men get relegated and we get punished’ and continued to express her anger and disappointment towards the decision and still to this day continues to share her strong view on the matter during her work as a football speaker.

In July 2007, Casey signed for Chelsea Ladies due to the disbandment of the Charlton Ladies section before joining rivals Lincoln Ladies who offered full-time training, something Chelsea were unable to match. Re-joining Arsenal Ladies on a two-year deal for the 2014 season, citing her desire to win more trophies, Casey Stoney is now currently playing for Liverpool Ladies.

Internationally, Casey Stoney has enjoyed an illustrious career in an England shirt. A product of the England Ladies age group squads, Stoney went on to make her full International debut in August 2000. Often given the captain’s armband, Stoney was named in the squad for Euro 2005 hosted in England, she, however, remained unused as the hosts made a group stage exit. Her disappointment was such that she considered retiring from international football, a truly challenging time which he discusses as a football speaker.

By the 2007 FIFA Women’s World Cup in China, Casey Stoney was one of four England players to play every minute of every match and won the Nationwide International Player of the Year award for the 2007–08 season, ahead of Anita Asante and fellow football speaker, Alex Scott. In May 2009, Stoney was one of the first 17 female players to be given central contracts by The Football Association showcasing the impact she had made and the development of the Women’s game.

At the Euro 2009 final tournament in Finland, Stoney recovered from a red card in a 2–1 opening match defeat to Italy to help England reach the final. Stoney explained that for many players this was not only the best moment of their careers, but possibly the happiest moment in their lives. Following the retirement of Faye White, Casey Stoney was appointed as the new England captain saying “It’s an absolute honour, the biggest privilege I’ve ever been given.” Stoney became the first female member of the Professional Footballers’ Association’s management committee and has played in three consecutive World Cup campaigns allowing here to have a tremendous amount of experience to share with audiences in her work as a football speaker.

Named 50th on The Independent newspaper’s Pink List of influential lesbian and gay people in the UK, Casey Stoney commands the utmost respect in Women’s football and is a household name. With a host of tales and anecdotes to share from her incredibly successful career, Casey Stoney MBE is a truly engaging and captivating football speaker who always leaves an incredibly positive impression on her guests providing a thoroughly entertaining and informative performance. A fantastic addition to any event, the former England Ladies and Team GB captain, Casey Stoney MBE is available to hire as a football speaker for any event or function.

When at corporate events, Casey Stoney is known to cover the following topics:

To book Casey Stoney MBE to make a personal appearance at your corporate event, function or conference, simply contact the Champions Football Speakers agency by filling in our online contact form or by calling a booking agent directly on 0207 1010 553.