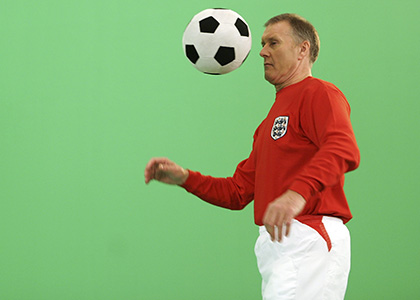 Former player, World Cup winner, manager and football speaker, Sir Geoff Hurst MBE was a member of the infamous 1966 World Cup winning English team and remains one of the most famous players of his generation. A striker during his career, Hurst remains the only player to score a hat-trick in a World Cup final as England recorded a 4–2 victory over West Germany at the old Wembley in 1966.

Hurst began his career with West Ham United, where he would go on to score 242 goals in 500 first team appearances. During his time with the Hammers Hurst was a truly indispensable and prolific performer, contributing to his team winning the FA Cup in 1964 and the European Cup Winners’ Cup 1965. Individually, Sir Geoff Hurst was named the West Ham United F.C Hammer of the Year on three separate occasions, a testament to his prowess and magnificent individual contributions to the team.

Hurst was sold to Stoke City in 1972 for a sum of £80,000. Following three seasons with Stoke, Hurst ended his career within the Football League with West Bromwich Albion in 1976. In pursuit of new challenges and prepared to broaden his horizons, Hurst went to play football in Ireland for Cork, Celticand in the USA for Seattle Soundersbefore returning to England to pursue a career in management taking charge of non-league side, Telford United. Sir Geoff has also coached in the England set-up before embarking upon an unsuccessful stint as manager of Chelsea. Later coaching Kuwait SC, Sir Geoff Hurst left a career in management in order to pursue ambitions and opportunities outside of the game to concentrate on his business commitments.

Hurst’s domestic career was incredibly successful however he will forever be renowned and revered for his time inInternational football. Having made his International debut for England just a handful of games prior to the 1966 World Cup, Hurst’s early signs of talent and brilliance led to his selection for the World Cup and he would go on to create a legacy at the tournament. Having not featured much in the tournament ahead of the knockout phase, an injury to Jimmy Greaves created an opportunity for Hurst. Sir Geoff made great contributions in both the quarter final and semi final however Greaves regained fitness ahead of the final and was requested to return by many fans and critics however England manager, Ramsey, would not be swayed and decided to remain with Hurst. The rest of course is history, a phenomenal hat-trick in the final inspired his nation to World Cup glory and is an instance that Hurst affectionately speaks of as a football speaker.

Sir Geoff Hurst MBE has established himself as both a businessman and football speaker, his experience as a player has provided him with a wealth of exciting and insightful stories and anecdotes to share with audiences; as the only player to score a hat-trick in a World Cup final Hurst always draws a large crowd and his football speakerpresentations continue to inspire those with an interest in football even if they are far too young to remember the now almost mythical win of ’66.

The man that inspired the famous “They think it’s all over…” quote, Sir Geoff Hurst MBE is one of the most popular football speakers working on the sports speaker circuit; his status as a veteran and champion mark him as a far more impressive choice than many modern day footballers and the longevity of his success both on and off the pitch demonstrates his determination and ambition.

Not only was Hurst one of the first footballers to be knighted but his contributions to football as a player, manager and sports speaker were recognized in 2004 when he was inducted into the English Football Hall of Fame. In 1975 Hurst’s status as an inspirational figure, winning footballer and impressive sportsman were recognized when he was presented with an MBE by her Majesty the Queen; Sir Geoff maintains a positive public profileby contributing to charity as President of Sparks the Children’s Medical Research Charity. A legendary and treasured personality, Sir Geoff Hurst is available to hire as a football speaker for any event or function and is certain to be a fantastic addition to any event and leaving a magnificent impression on his guests.

When at corporate events, Sir Geoff is known to cover the following topics:

To book Sir Geoff Hurst MBE to make a personal appearance at your corporate event, function or conference, simply contact the Champions Football Speakers agency by filling in our online contact form or by calling a booking agent directly on 0207 1010 553.