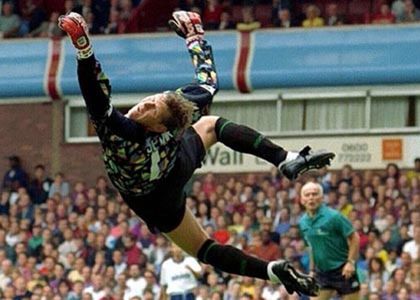 Former professional footballer Nigel Spink played as a goalkeeper and enjoyed a long and established career spanning over 25 years. An acquired football speaker, Spink played his domestic football across a range of clubs in England, including Premier League stalwarts Aston Villa, receiving one International cap during his career. His extensive and successful career has helped Nigel Spink establish a life after football as a thoroughly well respected football speaker.

Nigel Spink began his career with Writtle Minors F.C. at junior and senior level before moving to West Ham United as an apprentice, but soon moved to Chelmsford City and then once again, at the age of just 18, to Aston Villa. Having to initially bide his time at club due to a lack of opportunities, Spink eventually went on to help Aston Villa secure the European Cup in 1982, followed by winning the European Super Cup the following season. A further trophy followed in 1994 when Spink played an integral part of the Villa team who won the Football League Cup. Spink made over 360 appearances for the club before moving across the Midlands to join neighbours and arch rivals West Bromwich Albion in 1996, almost two decades after joining the claret and blue outfit.

Spinks is one of four players who have had the shortest International careers, playing a solitary 45 minutes, this half of football would be the entirety of his career for England. Retiring a few months shy of his 42nd birthday, Nigel Spink hung up his gloves in 2000 after having amassed over 440. His experiences across a multitude of clubs have helped Nigel Spink establish himself as a prolific and well-requested football speaker.

Turning his hand to professional coaching and management, Spink had a two year spell as manager of Forest Green Rovers until 2002. He later worked at multiple clubs, most recently Bristol City as a goalkeeper coach, passing on his knowledge and experience to the next generation of football goalkeepers. His ability to engage the players translates seamlessly into his aptitude as a football speaker, plying his advanced background and knowledge as a sports speaker specifically, Spink is a particularly sought-after personality for speaking duties revolving around dedication, determination and peak performance.

A reputable football speaker, Spink is available to hire for to attend events and engagements, Nigel Spink has established himself as a prolific footballer that has enjoyed a distinguished career while epitomising longevity and consistency. His knowledge and expertise of the game and the requirements to perform at the highest level for a sustained period coupled with managerial and coaching experience mean that Nigel Spink is an incredibly sought after football speaker available to hire for any event.

To book Nigel Spink to make a personal appearance at your corporate event, function or conference, simply contact the Champions Football Speakers agency by filling in our online contact form or by calling a booking agent directly on 0207 1010 553.