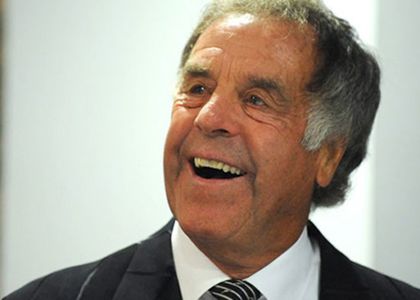 Mike England MBE is a former Welsh player, manager and football speaker. With a playing career that spanned from 1959 to 1980, Mike England is known as one of the greatest Welsh players of his generation, as well as, until recently at least, the youngest permanent manager for the Wales national team.

Playing for a number of teams during his professional career, including Blackburn Rovers and Tottenham Hotspur, Mike’s true allegiances always remained with his national team; upon his retirement in the late 1970’s Mike became the manager of the Welsh team and, under his guidance, the team reached as yet un-obtained heights.

Born in Holywell, Wales, Mike England MBE was a tall commanding centre-half, who could also play effectively as a centre-forward. During his time at Tottenham Hotspur he won the inaugural 1972 UEFA Cup Final and was runner up in the same competition 2 years later. His time at Spurs also yielded two League Cup trophies and an FA Cup title. England also played in the North American Soccer League for the Seattle Sounders between 1975 and 1979. He retired as a player in 1979, playing eleven games for the Cleveland Force of the Major Indoor Soccer League.

Mike England MBE is famous for his unusual “hat-trick” in 1974, Mike scored two own-goals and one goal in Burnley net, a feat he reflects affectionately upon when he performs as a football speaker. As a football speaker, Mike England MBE also speaks fondly of his time as Wales’ manager, and though his reign ended in tragedy he remains a tremendously proud supporter of his national team.

In his work as a football speaker, Mike talks openly of the incident that, for him, marked the end of his management career; a World Cup qualifier for the 1986 games against Scotland that saw the teams draw 1-1 signalling the devastating moment in which Scotland manger Jock Stein had a heart attack in the dugout right beside Mike England MBE. In his subsequent work as a football speaker, Mike has explained the devastating impact this moment had upon him and his decision to step down as manager as a result. In 1987 Mike left the Welsh team in a career change that saw him become the manager of a nursing home in North Wales, and then owned two nursing homes and ran his own timber business..

Mike England’s achievements as both a football speaker and player were recognised and thoroughly appreciated, Mike was awarded an MBE from her Majesty the Queen whilst in 2013, Mike England MBE was inducted into the Tottenham Hotspur Hall of Fame.

More recently Mike England MBE has returned to the stage as a football speaker, appearing on radio shows and as a guest at specialist sports events, Mike eloquently discusses football both past and present, providing opinions, predictions and insights into the world of football. A thoroughly experienced and engaging personality, Mike England MBE is certain to deliver a compelling performance and be a fantastic addition to any event as a football speaker.

To book Mike England MBE to make a personal appearance at your corporate event, function or conference, simply contact the Champions Football Speakers agency by filling in our online contact form or by calling a booking agent directly on 0207 1010 553.