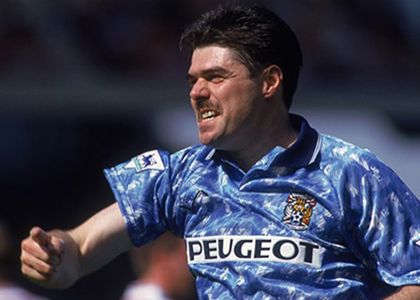 Micky Quinn began his career as an apprentice with Derby County signing for the East Midlands club upon leaving school in 1978. However, Quinn only lasted four months at the Baseball Ground, and returned to his Merseyside home, suffering from homesickness. His undeniable hunger in wanting to become a professional footballer was rewarded when he embarked upon a professional football career in 1979, Micky Quinn played for Wigan Athletic, Newcastle United and Coventry City as well as brief loan periods to Watford and Plymouth Argyle. Quinn was considered for both the England and the Republic of Ireland national teams however was unable to take part in any international games on behalf of his country.

Remembered for his life both on and off the pitch, Micky Quinn retired in 1996 and became a dedicated football speaker, since then he has travelled the UK sharing his stories and insights into the world of football both past and present. As a football speaker Micky is applauded for his accessible personality and comradery with the crowd, Quinn continues to work within the football industry and often appears as a sports speaker covering football games and reporting on high profile incidents and transfers for the BBC radio station TalkSPORT.

Renown for his lavish personality, early in his career Quinn was found guilty of drink-driving and received a £100 fine, as well as a one-year driving ban for a similar offence committed in Liverpool during 1985. Quinn breached the driving ban twice later in 1986, and in January 1987 he was sentenced to 21 days in prison but was freed after serving 14 days. Quinn speaks of this when he performs at any event as a football speaker and also talks about his magnificent transformation to later be named captain and take on the responsibility of a vital leadership role.

Famously quoted that he was the Premier League’s “fastest player over a yard“. Quinn attracted the crowd chant of “Who Ate All the Pies?” due to his physique, a title he used for his 2003 autobiography. Other nicknames included “Sumo”, “Hippofatamus”, and “Bob”, the latter from football fans who claimed that he bore a physical resemblance to the television presenter Bob Carolgees. In a colourful career, it is fair to say Micky Quinn was certainly popular with both fans and the public and dealt with his fair share of adversity and scrutiny, feelings he wonderfully portrays in the most entertaining manner as a football speaker.

Outside of his work as a football speaker, Micky Quinn has established himself as a race horse trainer, he owns his own stables and despite some controversy, has a rather impressive client list. Micky Quinn and can be hired an after dinner speaker for either horse racing or in particular in his field of expertise as a football speaker for any event, certain to contribute to a thoroughly entertaining and enlightening event.

To book Micky Quinn to make a personal appearance at your corporate event, function or conference, simply contact the Champions Football Speakers agency by filling in our online contact form or by calling a booking agent directly on 0207 1010 553.