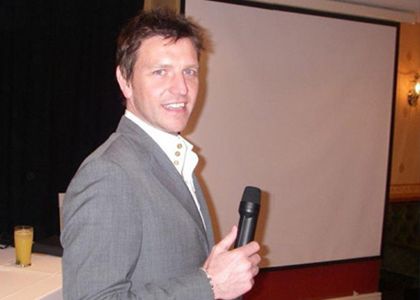 Lee Sharpe is a former English professional footballer, who as a player was predominantly a left winger from 1988 to 2004. Sharpe represented England on eight occasions in a career which spanned across 18 years and nine different domestic teams. Most recognisable for his time at Manchester United where he amassed nearly 200 caps, Sharpe is now known as a TV pundit and reality TV personality. An accomplished football speaker, Lee Sharpe is a popular addition as an after dinner speaker for events.

Sharpe joined Manchester United from Torquay United as a youngster in 1988, coming into a squad filled with talent and experience, Sharpe’s opportunities were limited to begin with however his drive and determination led to his selection for games and when given the chance Lee Sharpe would shine and make huge impact for the club in vital situations showing his class and clear potential.

Having established himself as a left winger, Sharpe earned a call up to the England squad just before his 20th birthday. In a difficult few seasons that followed where Sharpe was plagued with injury and received competition for his place from upcoming star, Ryan Giggs, he still managed to contribute significantly. His time at Manchester United saw him be apart of a team that won 10 trophies including 3 Premier League titles and the UEFA Cup Winners’ Cup. Sharpe was also named PFA Young Player of the Year during his time at the club for the 1990-91 season.

Scoring 40 domestic goals throughout his career, Sharpe’s career was predominately played in the English leagues except for a season long stint with Icelandic stride Grindavik. Since retiring from football in 2006, Lee Sharpe has taken to a role as an after dinner speaker and a multitude of reality TV appearances, starring in the inaugural series of Celebrity Love Island and later in Dancing on Ice; Sharpe has also provided punditry and commentary for the BBC’s Match of the Day programmes. His presentable attitude and relatable persona has worked alongside his increased recognisability due to a multitude of television appearances to improve his suitability as a football speaker.

A lively and animated speaker with many tales to tell from his sporting and television exploits, Sports SpeakerLee Sharpe would be a brilliant addition to any event with his chirpy and relatable character creating a connection between the audience and himself. An eloquent football speaker who has the ability to attend events as an after dinner speaker also, his charming individuality and sense of humour have enhanced his suitability for TV, making him a firm favourite across a multitude of shows.

A true jack of all trades, Lee Sharpe has also launched a fashion collection, invested within an estate agency and even has shares in an airline; an excellent sports speaker who connects will with the audience and is certain to provide a thoroughly entertaining and informative performance, Lee Sharpe is the ideal football speaker for your event.

To book Lee Sharpe as the football speaker for your corporate event, function or conference, simply contact the Champions Football Speakers agency by filling in our online contact form. For any further information, call a booking agent directly on 0207 1010 553.