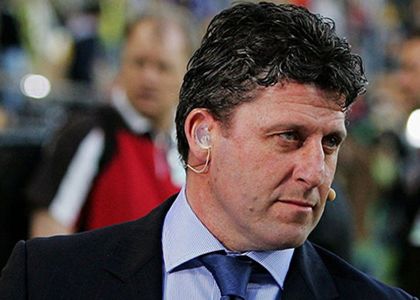 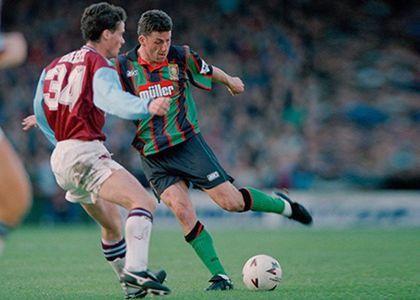 A renown British football pundit, ex-International footballer and speaker, Andy Townsend has appeared at no less than two football World Cup’s. A prolific playing career was followed by a hugely successful venture as a TV pundit, a radio presenter and sports speaker for numerous high-profile productions and several notable events which have gained tremendous popularity.

A playing career fondly remembered for his time at Southampton, Chelsea, Aston Villa and Middlesbrough as well as his high-profile celebrity status he enjoyed at the height of his glamourous playing career.

A career in which Townsend amassed a monumental 638 appearances for club and a further 70 International appearances for his nation, Republic of Ireland. A tenacious midfielder known for his hard tackling and relentless work rate, Andy really made his mark in the 1987-88 season for Southampton where he was an ever-present member of the team playing alongside Jimmy Case and Glenn Cockerill. These factors made his £300,000 transfer to rivals, Norwich, even more shocking to fans. Shortlisted for PFA Players’ Player of the yearat the end of a season which saw the club finished fourth in the top flight while reaching the semi-finals of the FA Cup.  This rich vein of from yielded great profit for Norwich when Townsend was sold to Chelsea for a handsome £1.2 Million.

Silverware continued to elude Townsend during his time at Chelsea despite contributing 12 vital goals during his 138 appearances. Once again, a transfer beckoned in 1993 when Aston Villa paid £2.1 Million for the midfielder. Trophies followed as Villa won the league cup in 1994 and 1996 with Townsend captaining the latter. Bryan Robson was the next manager to recruit Townsend, a decision that was rather rewarding as Middlesbrough achieved promotion in 1998 before Townsend formed a formidable partnership with Paul Gascoigne in midfield during a successful season for the club in the top flight of English football. Townsend retired in 2000, briefly taking a consultancy role with Bolton Wanderers in 2016.

Andy’s playing career was followed by a career that he remains hugely prominent in to this day, a pundit, a commentator and speaker, Townsend has enjoyed a host of opportunities on the commercial side of the game. A presenter and pundit for the ITV included coverage of Premiership, Champions League, FA Cup and International football. His charismatic demeanour coupled with his extensive knowledge of the game rapidly increased his popularity among fans and Townsend soon became one of the most respected football pundits on the circuit. Further recognition of his stature within punditry and commentary came when he appeared as one of the voices of on world renown EA Sports FIFA game series. Townsend has also enjoyed stints with BT Sport, Radio 5 Live and talkSPORT.

Outside his work as a football speaker Andy is a passionate fundraiser, patron of the George Coller Memorial Fund Townsend has also run the Great North Run raising funds for other charitable organisations.

Andy Townsend’s illustrious TV and radio presenting career has allowed him to travel the UK working as a sports speaker at a number of football themed events. Andy’s knowledge of the beautiful game is second to none whilst his wealth of anecdotes and insights into life behind the camera and in the changing rooms make for captivating entertainment at any corporate event. All of these factors combine perfectly to present Townsend as the idyllic and charismatic perfect for your event through his eloquent delivery as a football speaker.

To book Andy Townsend to make a personal appearance at your corporate event, function or conference, simply contact the Champions Football Speakers agency by filling in our online contact form or by calling a booking agent directly on 0207 1010 553.