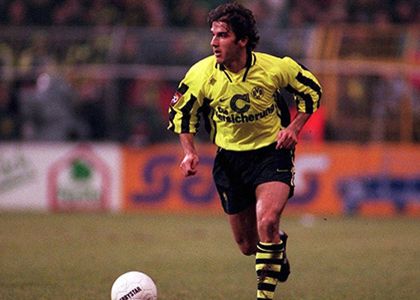 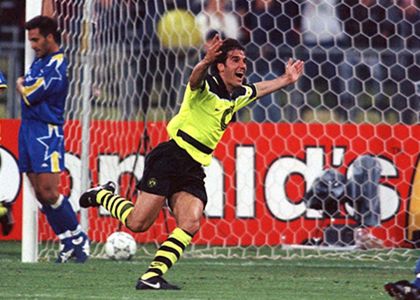 Karl-Heinz Riedle is a German retired professional footballer who played as a striker. Nicknamed “Air” due to his notable accuracy, jumping and timing skills in the air, he was a traditional yet well-rounded and prolific centre-forward. He appeared in 207 Bundesliga games over the course of eight seasons, scoring 62 of his 72 goals for Werder Bremen and Borussia Dortmund. He also played for Lazio in Italy and Liverpool in England. A German international for six years, Riedle represented the country in two World Cup camapigns – winning the 1990 edition – and Euro 1992.

Born in Weiler im Allgäu, Swabia, Riedle started his senior career in the Bayernliga with FC Augsburg, being club top scorer in the 1985–86 season with a total of 20 goals. His performances attracted interest from newly promoted Bundesliga side SpVgg Blau-Weiß 1890 Berlin, who signed him for a fee of 33,000 Deutsche Mark; he made his league debut for his new team on 9 August 1986, scoring in a 1–4 home loss against 1. FC Kaiserslautern.

After his team’s relegation, as last, Riedle nonetheless signed with SV Werder Bremen and scored 18 times in his first season to help the club win the national title. During his three-year spell with the Hanseatic he scored 58 goals all competitions comprised and appeared in back-to-back German Cup finals, losing both and finding the net in the 1989 edition – opening the score in a 1–4 defeat to Borussia Dortmund.

In the 1990 summer, Riedle moved to S.S. Lazio of Italy for a transfer fee of 13 million DM. During his stint with the Roman the club failed to win any silverware or reach any final, and his best output occurred in the 1991–92 campaign when he scored 13 goals in 29 games for an eventual 10th-place finish in Serie A; for two of his three years, he shared teams with countryman Thomas Doll.

Riedle returned to Germany in 1993 and joined Borussia Dortmund. He was a starter for most of his spell, often partnering Stéphane Chapuisat, but failed to reproduce his previous form, never scoring in double digits; he was however important in the conquest of the 1995 and 1996 national and in the 1996–97 UEFA Champions League scored twice against Juventus F.C. in the final for a 3–1 success.

In 1997, Riedle joined Liverpool in the Premier League. He was irregularly used during his stint at Anfield, especially after the phasing-in of 18-year-old Michael Owen.

In late September 1999, 34-year-old Riedle moved to Fulham where, along with his old Reds manager Roy Evans, he would serve as caretaker manager until the end of 1999–2000 after Paul Bracewell’s dismissal. Before the end of the following season – where he eventually netted once from 14 appearances to help to top-flight promotion – he announced his retirement.

Riedle made his debut for West Germany on 31 August 1988, playing 15 minutes against Finland and scoring in a 4–0 away win for the 1990 FIFA World Cup qualifiers. Selected by coach Franz Beckenbauer for the finals in Italy as a backup to Klinsmann and Rudi Völler, he contributed with four games as the national team won its third title, starting once due to suspension to the latter.

A World Cup winner, incredibly talented footballer and charismatic personality, Riedle has enjoyed an incredibly illustrious and decorated career within football and his diverse experiences mean he has a host of tales and anecdotes to share along with many learnings and teaching from football that are applicable and relevant to any walk of life. Karl-Heinz Riedle is available to hire for any event or function as a football speaker.

When at corporate events, Karl Heinz-Riedle is known to cover the following topics:

To book Karl Heinz-Riedle to make a personal appearance at your corporate event, function or conference, simply contact the Champions Football Speakers agency by filling in our online contact form or by calling a booking agent directly on 0207 1010 553.