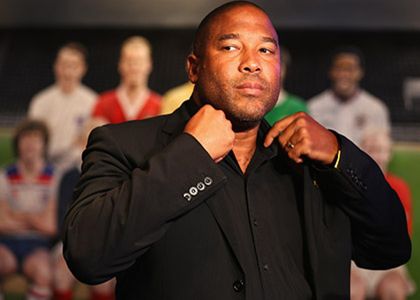 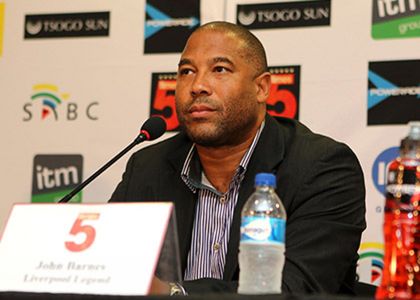 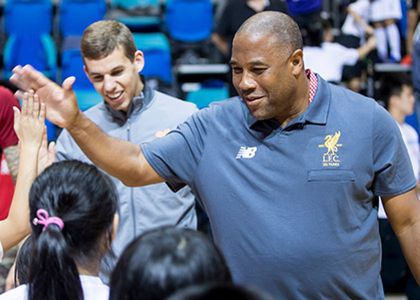 Known as one of the best wingers to have ever played in the English Premier League, John Barnes enjoyed an illustrious career with Liverpool FC and the England national squad. The winner of two First Division titles and two FA Cups, John also set a new record for black players of the time by recording 79 appearances for the national side. Inducted into the English Football Hall of Fame in 2005, Barnes was recognised for his dedication to the game and enthusiasm for supporting the development of new players. A fabulous football speaker, John’s charismatic persona and articulate delivery of after dinner speeches make him a highly desirable personality to appear and host events.

Making his debut for Liverpool in August 1987, John enjoyed a 2-1 victory over Arsenal and went on to prove his exceptional talent as a winger during his first season. John had joined one of the best performing clubs of the era, with the side only losing two matches in Barnes’ first season, John rose to the challenge and proved his place as an instrumental element of Liverpool’s team chemistry. John ended his time at Liverpool in 1997, after playing 407 times and scoring 108 goals. Barnes’ time at an elite level of the sport gives him the experience and knowledge to deliver talks as a football speaker on achieving peak performance and maximising success at any opportunity.

A Jamaican national, Barnes had no intention of representing Jamaica at international level as the “Reggae Boyz had not yet made a significant mark on world football and he was eager to get to the game’s biggest stage”. Opting to play for England, his reason being they were the first team to enquire about his services, Barnes went on to represent England at the FIFA World Cup . Barnes went on to become England’s former most capped black player winning 79 caps and scoring 11 goals, but compared to his club form, he was never seen as a player who peaked when wearing an England shirt. Bobby Robson famously described him as the “Greatest enigma” of his career; whilst including him for his all-time dream team England squad of all the players he had picked as manager in his 1990 book “Against All Odds” he was baffled at Barnes’s inconsistency.

Turning his hand to management after his playing career, Barnes began his managerial career at Celtic, before being appointed as head coach of Jamaica. Barnes guided his new Jamaican charges to a first-place finish in the 2008 Caribbean Championships, qualifying as the top Caribbean side for the 2009 CONCACAF Gold Cup. In search of a move back to England, Barnes was appointed manager of Tranmere Rovers, his last post before working as a commentator and pundit for ESPN and SuperSport.

John became even more well-known after his leading role on the New Order song World in Motion, where he rapped his way into the charts in what is considered to be one of the best ever football pop songs. Approaching appearances with an amiable and relaxed manner, John is a warming and inviting personality that can relate to audience members during after dinner speeches. Equally at home participating in question and answer sessions, John thoroughly enjoys giving answers to fan’s questions, giving them an insight into the real premier league and international football lifestyle. John’s vast portfolio of previous speaking arrangements make him one of the most desirable football speakers around.

Twice in his career, Barnes was voted Football Writers’ Association Footballer of the Year. He has also won the PFA Players’ Player of the Year and is widely regarded as among the most talented players to wear an England shirt. Affectionately known as ‘Digger’ by Liverpool fans, his popularity was further emphasised when he finished in the top 5 of the poll 100 Players Who Shook The Kop which was conducted by the official Liverpool Football Club website.

A true Liverpool FC legend, John Barnes has enjoyed a prolific, distinguished and impressive career. His abundance of experiences and stories make for a fascinating and highly informative performance as a football speaker, Barnes’ affectionate and charismatic personality allows him to fully engage with his audience. A truly inspiring and insightful football speaker, John Barnes is available to hire for any event.