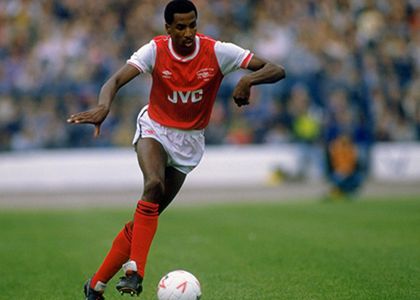 One of the most accomplished and renowned footballers of his time, Viv Anderson MBE is a former player, coach and terrific football speaker for events and functions. Best known for his ten years at Nottingham Forest, Viv Anderson made history becoming the first black player to represent England in a full international match.

Born in Nottingham, Anderson spent a year as a schoolboy with Manchester United before being released. He returned to Nottingham and breaking into the Nottingham Forest team during 1974 and became a regular after the arrival of Brian Clough as manager of the East Midlands club. Then in the Second Division, in January 1975 Anderson was a part of the side that won promotion to the First Division in 1977, winning the title, along with the League Cup, a year later. Anderson was one of the first black players to represent top English clubs at the time and regularly suffered racial abuse from fans of rival teams. He was regularly pelted with bananas and targeted with racist chants, an experience he often speaks of when he works as a football speaker discussing the ways in which he dealt with this catastrophic adversity.

A gangly, awkward figure, he was a much-admired tackler and was also quick going forward and occasionally scored vital goals. Anderson was part of the Forest team that retained the League Cup and then clinched the European Cup in 1979 with a victory over Malmö. Anderson continued to impress for Forest during this period and picked up his second European Cup winners’ medal when they retained the trophy with victory over Hamburg in Madrid. It was during his time at Nottingham Forest that Anderson first gained International recognition and selection. Delivering anecdotal tales as a football speaker, Viv recalls his time in the limelight of football and the adversity he faced at the time.

Moving onto the likes of Arsenal where he won a further League Cup and Manchester United where he was a crucial part of Sir Alex Ferguson’s rebuilding plans and won an FA Cup in the process. Viv continued his run of peak performance, playing for England in World Cup campaigns and adding to his reputation as a reliable player with strong leadership qualities. An ideal football speaker for events, Viv is an engaging character who compels audiences with his ability to entertain and interact with an audience.

Following his time at Manchester United, Anderson joined Sheffield Wednesday on a free transfer in January 1991, helping them to promotion from the Second Division, although he missed the League Cup final triumph over Manchester United as he had played for his old club earlier in the competition. Despite originally being thought of as a short-term signing, Anderson established himself in the Wednesday first team and captained the side on many occasions. He played an active part in the Owls team that finished third in the 1991–92 First Division and seventh in the first season of the Premier League. He also helped Wednesday reach the FA Cup and League Cup final in 1993 before moving to Barnsley and then Middlesbrough.

Taking on managerial positions after his playing career, Viv’s leadership qualities were shown once again, an attribute applicable to both business and sporting environments as a football speaker. As of 2005, Anderson runs a sports travel agency and also works as a goodwill ambassador for the Football Association as well as appearing as an occasional guest pundit on MUTV. Awarded an MBE in January 2000, Viv Anderson was also inducted into the English Football Hall of Fame. An incredibly popular footballing personality, Viv Anderson MBE is available to hire as a football speaker for any event or function.

When at corporate events, Viv Anderson is known to cover the following topics:

To book Viv Anderson MBE to make a personal appearance at your corporate event, function or conference, simply contact the Champions Football Speakers agency by filling in our online contact form or by calling a booking agent directly on 0207 1010 553.