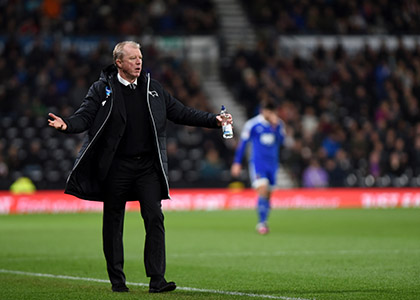 Steve McClaren is a former English professional football player, manager and football speaker who recently worked as the manager of East Midlands team, Derby County F.C.. McClaren’s proudest moment as a manager of the England National Team between August 2006 and November 2007. In incredibly well respected manager in football, McClaren regularly utilises his knowledge and expertise to deliver eloquent performances as a football speaker drawing huge interest and demand across the nation.

As a player, Steve McClaren was a midfielder who spent most of his career in the lower leagues of English football. The majority of his playing career was spent with Hull City, who he joined in 1979 at the age of 18 after leaving school. McClaren went on to play 178 games scoring 16 goals before leaving in 1985 to join Derby County where he remained in between 1985 and 1988, making 25 appearances. During his time with the Rams, McClaren experienced his career highlight as player being apart of the Derby County team who won the Football League Second Division title.

Following this trophy winning campaign, Steve joined Lincoln City for a brief spell on loan before moving to Bristol City where he played 61 times, scoring two goals. McClaren’s final club was Oxford United, Steve played 33 times for Oxford before an injury forced him to retire in 1992. McClaren’s playing career in football allows for him to provide a fascinating insight into the world of football and the requirements of peak performance at events as a football speaker.

McClaren’s injury led him to venture into another career within football, turning to a career in management, following initial appointments as an assistant manager working for Derby County, Manchester United and England, Steve’s career as a manager began at Middlesbrough F.C. who were in the Premier League. Middlesbrough went on to win the League Cup in 2004 and were runners-up in the 2006 UEFA Cup.

Steve McClaren’s performance as the manager of Middlesbrough F.C. was recognised by England and after being placed on a shortlist of managers to succeed Sven Goren Eriksson, McClaren was appointed manager of England after first choice, Luiz Felipe Scolari decided he did not want the job due to the intrusiveness that came with the role, earning McClaren his nickname, ‘Second Choice Steve’. The pinnacle of any manager’s career, McClaren spent 2 years at the helm of his nation’s team, a turbulent time in charge which saw Steve make some bold decisions namely dropping the legendary David Beckham, McClaren speaks fondly about his time as manager of England when he performs as a football speaker.

In 2008, McClaren’s domestic success led to his appointment as manager of FC Twente, with whom he continued his managerial triumphs and won the club’s first Eredivisie Championship in the 2009/10 season.

Shortly after this, McClaren worked as the manager of German team VFL Wolfsburg in Germany, a move in which he relocated his whole family to the country and where he remained up until February 2011. After a short spell as manager of Nottingham Forest, McClaren returned to FC Twente in January of 2012.

Shortly after this, McClaren was appointed as the manager of Derby County F.C., the club where he had his first opportunity in management in the form of an assistant manager. McClaren left Derby County in May of 2015 after a run of bad results to become head coach of Newcastle United on a three-year deal. It did not take long for Derby County to desire McClaren’s services once again as he returned to the club in October 2016. McClaren’s most recent post has been as a coaching consultant for Maccabi Tel Aviv.

An incredibly well respected football manager and personality, Steve McClaren has a wealth of knowledge gained from a distinguished and diverse career within football. With a host of tales and anecdotes to share with his audiences coupled with a number of vital traits and characteristics learnt from his time in football that transfer magnificently to any walk of life, Steve McClaren is available to hire as a football speaker and is certain to deliver an intriguing and thoroughly informative event.

To book Steve McClaren to make a personal appearance at your corporate event, function or conference, simply contact the Champions Football Speakers agency by filling in our online contact form or by calling a booking agent directly on 0207 1010 553.