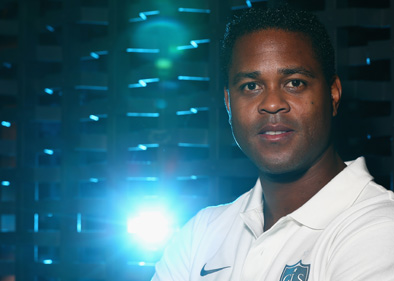 Patrick Stephan Kluiver is a Dutch former footballer, coach and former director of football for Paris Saint-Germain in France.

Kluivert is the assistant manager of Cameroon. He played as a striker, most notably for AFC Ajax, FC Barcelona and the Netherlands national team.

He was already part of Ajax’s Golden Generation of the 1990s at the age of 18, scoring the winner in the 1995 UEFA Champions League Final. He spent six years with Spanish club Barcelona where he formed a successful partnership with Rivaldo, where both won the Spanish La Liga championship of 1999 and Kluivert scored 124 goals from 249 appearances in all.

Kluivert played for the Dutch national team from 1994 to 2004. With 40 goals in 79 appearances, he is the third highest top goalscorer for Oranje. He played in three European Championships and the 1998 FIFA World Cup and was joint top scorer at Euro 2000 whereupon the scoresheet he tallied a total of 5 times. In 2004, he was named in the FIFA 100, a list of the 125 greatest living footballers chosen by Pelé as part of FIFA‘s centenary observances.

He began his coaching career as an assistant at AZ and then NEC. He had a brief coaching stint in Australia with the Brisbane Roar, before coaching Jong FC Twente to a national title in the Dutch reserves league. He was assistant manager to Louis van Gaal with the Netherlands national football team when they finished third at the 2014 FIFA World Cupin Brazil.

In 2015, he took over as head coach of the Curaçao national team for the country’s 2018 FIFA World Cup qualifying and the 2017 Caribbean Cupqualifying campaigns. In 2016, it was announced that he would take over the Ajax A1 (under-19) selection, coaching his son, Justin Kluivert, before taking a position as director of football for Paris Saint-Germain.

To book Patrick Kluivert to make a personal appearance at your corporate event, function or conference, simply contact the Champions Football Speakers agency by filling in our online contact form or by calling a booking agent directly on 0207 1010 553.