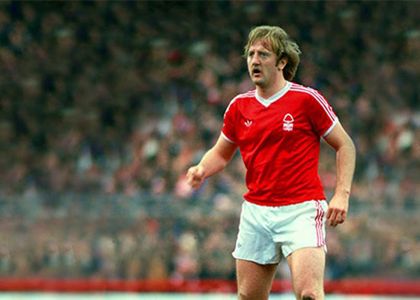 Playing a vital role in Nottingham Forest’s European successes, Kenny Burns is a former Scottish Internationalfootballer who enjoyed a hugely successful career spanning 22 years. A compelling football speaker at events, The peak of his playing career was with Nottingham Forest, with whom he won the 1977–78 Football League title and the FWA Player of the Year award. He also won two European Cups and two Football League Cups. Kenny Burns has addressed numerous audiences as a football speaker, enabling listeners to experience the life of a professional footballer.

Beginning his career at Rangers as an apprentice, Kenny left for Birmingham City in 1971 aged 17. Kenny played both as a defender and striker for the club before moving to Nottingham Forest for £150,000 in 1977, whilst being converted back to being solely a central defender.

Proving to be a resounding success in his new role at the back, Burns was voted the FWA Footballer of the Year for the 1977-78 season, with his side also winning the First Division title in the process. With a defensive partnership alongside Larry Lloyd, Burns was an influential figure in his side during the side’s European campaigns over the next three seasons. Nottingham Forest would go on to win both the 1979 and 1980 European tournaments. Kenny is one of the most desirable after dinner speakers thanks to his ability to instil values of success maximisation and peak performances into business and sporting environments alike.

Burns left Nottingham Forest for Leeds United in 1981 after the club accepted a £400,000 fee. Burns played for the Yorkshire side until 1984, appearing 56 times whilst living up to his reputation as a skilful and reliable defender. Discussing issues such as drive and determination as an a football speaker, Kenny Burns inspires audiences to achieve all they can and to strive for success.

After Leeds United, Kenny played for a multitude of clubs including Derby County, Barnsley and Elfsborg before retiring in 1993. Burns’ varied and diverse career has led him to experience a large amount within the professional game, making him a hugely intriguing football speaker. After his playing career, Kenny Burns transferred his knowledge and experiences over to a managerial career as he took up the post of assistant manager of Telford United in 1993.

Burns made 20 International appearances for Scotland and was an ever popular personality among fans at Nottingham Forest. At one time he was renowned for his ‘wild man’ image and while maintaining an aggressive nature, he also possessed a shrewd football brain and was always likely to score vital goals.

A vastly experienced footballing personality with a host of tales and anecdotes, Kenny Burns is certain to add a wealth of knowledge and provide a compelling insight into the world of football at any event where he is working as a football speaker.

To book Kenny Burns to make a personal appearance at your corporate event, function or conference, simply contact the Champions Football Speakers agency by filling in our online contact form or by calling a booking agent directly on 0207 1010 553.