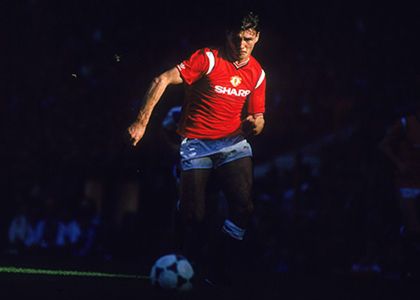 Francis Anthony "Frank" Stapleton, born 10 July 1956 in Dublin, is a former Irish football player and manager. He is best remembered for his time at Arsenal, Manchester United and as a pivotal player for the Republic of Ireland. He has also been manager at Bradford City and MLS club New England Revolution.

Frank Stapleton was a tough tackling forward who was a particularly good header of the ball. Having started his career with Arsenal, joining them in 1972 as an apprentice, after being turned down by Manchester United. He made his first-team debut in 1975 against Stoke City, and would go on to form a potent striking partnership with Malcolm Macdonald; the two scored 46 goals between them in 1976–77. He was Arsenal's top scorer for the three following seasons, and helped the Gunners reach a trio of FA Cup finals; Stapleton scored one of the goals in Arsenal's 1979 FA Cup Final 3–2 win over Manchester United, and scored 108 goals in 300 appearances in total for the Gunners.

Stapleton went on to move to Manchester United in 1981 for £900,000, a fee set by tribunal after the two clubs could not agree a fee. He helped United win the 1983 and 1985 FA Cups. It was in the first of those finals, when he scored against Brighton, in which Stapleton made history by becoming the first man to score for two different clubs in FA Cup Finals. In 1983, Stapleton also won the FA Charity Shield and was a part of the Football League First Division PFA Team of the Year. He left United in 1987, after scoring 78 goals for the club in 365 matches.

He went on to play for Ajax in Amsterdam, before returning to England with Derby County, Blackburn Rovers, Aldershot, Huddersfield Town as a player-coach and Bradford City, where he spent three seasons after a brief period at Le Havre in France. After being sacked as Bradford's player-manager in 1994, he had a brief spell at Brighton & Hove Albion in the 1994–95 season, playing two games before finally announcing his retirement as a player.

Internationally Stapleton also won 71 caps for the Republic of Ireland, scoring a then record 20 goals. A proud Irishman, Frank was committed to international football insisting that an "international release clause" be inserted to all of his contracts so that he could be released to play in international games for Ireland. A prolific player for his nation, Frank also had the honour of leading from the front and captaining the side.

A managerial career followed for Frank once he called time on his playing career, Stapleton moved to the United States to manage Major League Soccer team, New England Revolution in 1996. In the 2003–04 season he briefly returned to English football as a specialist coach of Bolton Wanderers. The Bolton manager Sam Allardyce wanted Stapleton to enhance the skills of the strikers at the club and saw the Irishman as an ideal candidate, given his successful playing career. Most recently Frank was appointed assistant manager to former teammate Ray Wilkins with Jordan on 3 September 2014.

A great in his time and a wonderful footballing personality, Frank Stapleton is available as a football speaker for your event. A motivational and inspirational personality blessed with an abundance of talent and named in Arsenal’s top 50 players of all time, Stapleton will be a phenomenal addition to your event and provide wonderful insights into the game and his fantastic journey. A truly idyllic football speaker for your event.

To book Frank Stapleton to make a personal appearance at your corporate event, function or conference, simply contact the Champions Football Speakers agency by filling in our online contact form or by calling a booking agent directly on 0207 1010 553.

To book Frank Stapleton to make a personal appearance at your corporate event, function or conference, simply contact the Champions Football Speakers agency by filling in our online contact form or by calling a booking agent directly on 0207 1010 553.