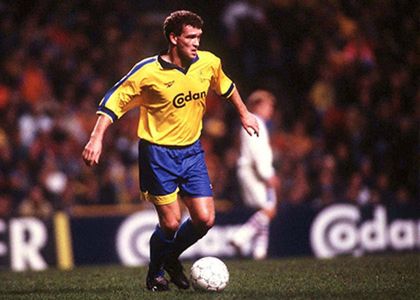 Denmark and Arsenal football legend John Jensen has enjoyed a successful career across both the domestic and international game. Having made nearly 320 domestic appearances and represented Denmark on 69 occasions during a career which spanned 18 years, Jensen is now a football speaker and has since turned his attentions to television commitments and management. Specialising as a football speaker, John Jensen is proving ever popular with a whole host of events and occasions.

Jensen started his career at Brøndby IF and was an integral part of the team which won several Danish championships in the late 1980s, crowned by a call-up to the Denmark national team and the Danish Player of the Year award in 1987. Following a short stay with German team Hamburger SV, John was back with Brøndby IF in 1990 where he took part in the club’s successful 1991 UEFA Cup campaign.

Jensen is most well-known for his successful spell with Arsenal in which he made 132 appearances over four years; during his time with the Gunners Jensen helped them win the League Cup, FA Cup and the Europeans Cup Winners’ Cup– an impressive haul for a relatively short duration. In 1999 Jensen moved to Herfølge BK to undertake a player-manager role, playing himself on 40 occasions. Retiring from playing duties in 2001, he continued as manager for another season before progressing back to Brøndy IF to ignite a long and successful coaching and management career. A prolific professional across his career, Jensen has focused his efforts on becoming an articulate sports speaker and in particular a football speaker, something which he is completing with the same competence that he has applied to his entire career.

An obvious highlight in his career, Jensen was part of the UEFA EURO 1992 trophy in which Jensen scored the opening goal in the final. Having won 69 caps for Denmark, Jensen turned his hand to coaching and management. Jensen retired from playing in 1999 and accepted the job of player/manager at Herfølge BK, a small Danish club, and immediately made a name for himself by winning the Danish Superliga on his first attempt. After a short spell working alongside Michael Laudrap at old club, Brøndby IF before following Laudrap to Spanish club Getafe before various other short managerial spells. His first season in management is still his fondest as he went on to be named Danish Coach of the Year.

His seamless transition from player to manager shows a real knowledge and love behind the game, something which transfers into his ability as a football speaker. A sports professional who has comprehensive experiences across the sport, John Jensen is an exceptional football speaker.

Turning his talents to television presenting on Danish station 6’eren, adding punditry to his already accomplished talent set, Jensen is well equipped as a football speaker and thrives went delivering speeches as a football speaker explaining and elaborating on his impressive career to date.

Entering Danish footballing folklore from his exploits in the 1992 Euro winning Denmark side, Jensen is a hugely popular figure within Danish football and is affectionately known as “Faxe”, incredibly skilled with regards to delivering exceptional keynotes and with an abundance of knowledge and stories to share, Jensen is an ideal addition to any event as a football speaker.

To book John Jensen to make a personal appearance at your corporate event, function or conference, simply contact the Champions Football Speakers agency by filling in our online contact form or by calling a booking agent directly on 0207 1010 553.