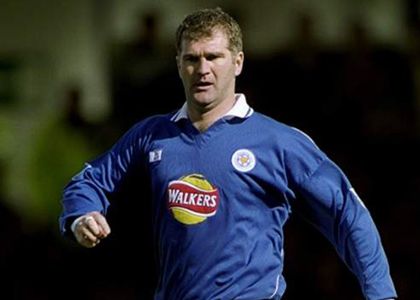 Former Everton and Leicester City player Ian Marshall retired from football in the early 2000’s and has gone on to work as a dedicated sports speaker appearing at sporting events and touring on the after dinner speaker circuit. He notably played in the Premier League with Oldham Athletic, Ipswich Town, Leicester City and Bolton Wanderers, as well as playing in the Football League for Everton and Blackpool.

Beginning his career as an apprentice for Everton, Ian Marshall made his name as a football speaker and player when he joined Oldham Athletic in 1988 where he would remain for five years and scored an impressive 50 goals in less than 200 appearances. Marshall moved to the Premier League in 1993 leaving Oldham for Ipswich Town for £700,000 where he improved on his previous performance by scoring 36 goals in only 90 appearances.

In 1996, Marshall was signed by Leicester Cityfor a sum of £800,000. While at Leicester, Marshall was cup-tied for their victory in the 1997 Football League Cup Finalbut was part of the 2000 League Cup winning team, coming on as a substitute in the final. In April 1999, he also scored a memorable last minute winner against boyhood club Liverpool at Anfield. Leaving on a free transfer to Bolton Wanderers, where he helped the club to the Premier League.

Marshall’s success continued and in 2002 he captained Blackpool to victory at the Millennium Stadium of the LDV Vans Trophy against Cambridge United. After this win Ian Marshall chose to leave his life as a strikerbehind and has go on to work as a specialist football speaker appearing at events for many of his previous clubs as well as after dinner speaker functions for the Football League and the Premier League.

Upon retirement Marshall established himself as a football speaker and coach and relocated to Canada where he opened the Ian Marshall Soccer Academy where he trains future players. Eventually moving back to the UK, Ian Marshall continued with his football coaching and joined forces with former Leicester City team mates Muzzy Izzet, Steve Claridge and Steve Walsh as part of their PTC Sports Group. In 2015 the group launched their own football academy based in Ipswich and operated by Marshall and Ipswich Town legend Jason Dozzell. The academy offers 16-18 year-olds the chance to complete a BTEC Level 3 diploma in Sports Studies or a Level 2 Activity Leadership paid apprenticeship alongside playing in the English Colleges League.

Famously, twenty years ago Ian Marshall posed in the Filbert Street stands with a huge bowl of paella on his lap and what appeared to be a big grin across his face. The photo which gathered something of a cult reputation. The notorious article was followed by a highlight in Marshall’s career, an unconventional throw-back capable of playing centre-back and centre-forward, Marshall converted from Steve Walsh’s knock-down in the 11th minute. ‘It was not a worldie but a very sentimental goal, purely because of what it meant to everybody and the occasion. In my top-five all time,’ a story Marshall fondly recollects in his performances as a football speaker.

Ian Marshall is certain to be a fantastic addition to any event as a football speaker, his experiences within football which he relays in a charismatic and captivating manner making for a compelling performance for his audience. A thoroughly entertaining Leicester City cult hero is available as a football speaker for any event.

To book Ian Marshall to make a personal appearance at your corporate event, function or conference, simply contact the Champions Football Speakers agency by filling in our online contact form or by calling a booking agent directly on 0207 1010 553.