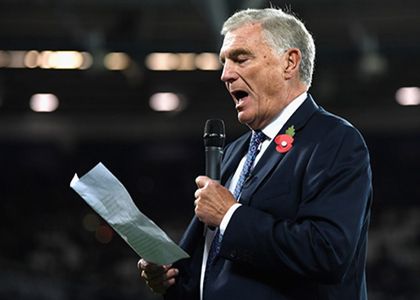 Director of Football Development at the FA

Sir Trevor Brooking CBE is undoubtedly one of the most recognisable names within English football over the last couple of decades, having held pretty much any role it is possible within the game. Beginning his career in football as a player before progressing on to become a manager, pundit, commentator and to finally hold a role with the English FA, Brooking Director of Football Development in England. Sir Trevor’s knowledge and expertise in the game is unrivalled, this incredible knowledge base makes him an idyllic football speaker.

Enjoying all of his success at West Ham United, Sir Trevor Brooking progressed through the Youth ranks, to amass an impressive 647 appearances for the club and scored 88 goals over the course of his 17 year stint at the club. Brooking won the 1975 FA Cup and the 1980 FA Cup in which he scored the only goal. Sir Trevor Brooking’s magnificent individual performances and contributions led to him being name the Club’s Player of the Season on four occasions. Following his time with the Hammers, Brooking went on to very briefly play for Newcastle Blue Star and Cork City before being appointed as caretaker manager of West Ham United on two occasions.

Internationally, Brooking played for his country, England, on 47 occasions and scored 5 times. Retiring from football in 1984, he briefly undertook the manager role with his beloved Hammers in 2003; due to ill health forcing Glenn Roeder out for the end of the 2002-03 season and with Brooking sitting on the West Ham board, he stepped into the breach- despite his best efforts, they were unfortunately relegated with a record high number of points. Averaging a win percentage of 64.29% for the 14 games he undertook, Brooking was a real fans favourite being acclaimed as “the best manager West Ham never had”; this metaphorical accolade makes Brooking a favourite with the public, especially West Ham fans, as an after dinner speaker and sports speaker.

An eloquent sports speaker, at the end of 2003 Brooking was named as the Director of football at the Football Association– a role that he still holds to this day. As well as his role with The FA and as an accomplished after dinner speaker and football speaker, Trevor Brooking is also well known for work within commentary; featuring on the BBCs ‘Match of the Day’ as well as having his voice conveyed within the Pro Evolution Soccer video game series, Brooking is up in the highest ranks of football immortality.

His extensive knowledge and experiences across football help Sir Trevor Brooking to deliver clear, informative and enlightening speeches as a football speaker. His identifiable persona and impeccable reputation mean that even those with limited football knowledge will be aware of his successes within the sport. An exemplary professional and a fantastic role model to everyone on the perks of hard work, Sir Trevor Brooking would be an exceptional addition to any event. Awarded an MBE and CBE for his services to football along with his Knighthood, In November 2015, Sir Trevor Brooking was awarded and named the ‘Global Football Ambassador ’at the 4th annual Football Business Awards. An exceptional footballing personality with a wealth of knowledge and infectious personality, Sir Trevor Brooking is available to hire for any event as a football speaker.

When at corporate events, Trevor Brooking is known to cover the following topics:

To book Sir Trevor Brooking CBE to make a personal appearance at your corporate event, function or conference, simply contact the Champions Football Speakers agency by filling in our online contact form or by calling a booking agent directly on 0207 1010 553.