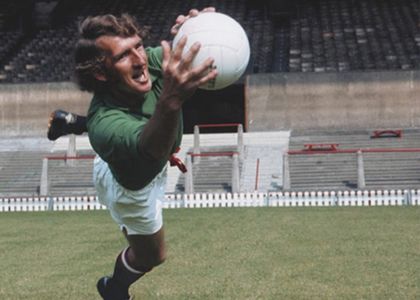 Manchester United great, Alex Stepney, was the goalkeeper for the team when they became the first English team ever to win the European Cup, Stepney was one of the most revered players of his time. Initially joining Tooting & Mitcham United, Stepney was spotted by Millwall who signed him as an amateur in 1963, only to develop into a professional within two months, an acknowledgment to his noticeable potential.

An ideal football speaker for both sporting events, Alex is a captivating character who can instil core values he learnt from a number of successful campaigns with football giants Manchester United related to peak performance and maximising success.

Joining Manchester United in 1966 for £55,000, a world record fee at the time, Stepney made his debut later the same year in a match against Manchester City in a huge local derby. With Stepney in goal, United went on to win the 1967 League, resulting in automatic qualification into the European Cup. A solitary International appearance came a year after in a game against Sweden, just 7 days prior to England winning the European Cup Final.

Stepney played a fundamental role in the European campaign, taking his side to the final at Wembley where he was faced by footballing legend, Eusebio, producing a remarkable moment, the save of a close-range shot leading to Eusebio’s applause of Stepney’s prowess despite the ongoing game. Manchester eventually went on to win the final 4-1 after a tense period of extra time. Describing matches and memories such as this as an after-dinner speaker, Stepney’s compelling repertoire will keep audiences entertained and engrossed throughout.

The only United player to feature in team of both the European Cup in 1969 and the 1977 FA Cup winning side, Stepney played his last game for Manchester in April 1978. Appearing for the side 546 times, keeping 175 clean sheets, Alex is sure to go down as a great of Manchester football.

Alex also holds the remarkable record of being Manchester United’s highest ever scoring goalkeeper, thanks to his sporadic appearance on the other side of a penalty. The consummate professional, Alex has addressed hundreds of audiences as a sports speaker, ensuring an accomplished performance for your event.

A captivating personality for events, Alex Stepney can engage with guests and give them an insight into what top-flight football was really like during his era. Once the most expensive goalkeeper in the world and a Manchester United patron, Alex interacts with audience members during talks as a football speaker, Stepney enjoys participating in question and answer sessions, allowing anyone to learn the answers to questions they have held for years.

A man who will be remembered and revered for years to come, most notably for the legendary and famous ‘Eusebio save,’ and so passionate he memorably dislocated his jaw through his quest to organise his defence against Birmingham in 1975. Alex Stepney truly is a footballer for the ages, a truly inspirational and admired figure, your guests can hear from this legend first hand as a football speaker in an event sure to remain in the hearts of many for years to come.

To book Alex Stepney to make a personal appearance at your corporate event, function or conference, simply contact the Champions Football Speakers agency by filling in our online contact form or by calling a booking agent directly on 0207 1010 553.