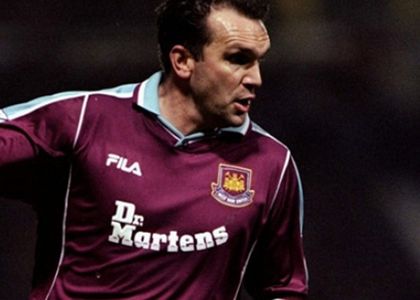 Football legend, television personality and actor Neil ‘Razor’ Ruddock enjoyed an extensive and illustrious playing career for a number of the country’s best clubs. As a footballer he played as a central defender from 1986 to 2003, and was voted the 17th “hardest footballer of all time.” One of the most colourful characters in the sport, Neil Ruddock is a brilliant football speaker who has the unique ability to effortlessly engage and entertain any audience.

Beginning his career with Millwall in 1985, Razor transferred to Tottenham Hotspur just a year later where injury struck meaning he only made 11 appearances for the club before rejoining Milwall. Ruddock then joined Southampton in February 1989, in a £200,000 transfer from Millwall. A rugged, uncompromising defender, he soon became popular amongst the Southampton fans especially after confidently tucking away a penalty against Newcastle United. Despite early disciplinary problems at The Dell, Ruddock’s talents as a confident, left-footed defender earned him England Under-21 honours. Powerful in the air, he could tackle strongly but was also able to bring the ball forward out of defence.

Graeme Souness signed Ruddock for £2.5 million to Liverpool in 1993 to add some steel to his defence. Renowned for his hard-man attitude and strength on the pitch, Ruddock spent a large part of his career at Liverpool, making 115 appearances between ’93 and ’98. Acting as a football speaker, Ruddock provides a compelling insight into his time as the club as well as some of the key moments of his career.

Whilst at Liverpool, Ruddock was famously involved in an on-field scuffle with Manchester United star Eric Cantona. Ruddock responded to Cantona’s taunts about his weight by turning down the Frenchman’s collar – in his after dinner speaking, Ruddock says of the incident- “trust me to pick the only Frenchman around who wanted a tear-up”. Ruddock was never far from controversy in his time at Liverpool, with tabloids highlighting his personal weight problems, parenting issues, philandering, marital issues and drink driving infringements, including an infamous incident involving his “Porsche and a blonde” as confirmed by Suleman his private servant. These events and anecdotes make for fantastically entertaining content when Ruddock performs as a football speaker.

Neil moved to a number of clubs including Queens Park Rangers, Crystal Palace and West Ham before retiring from football in 2003 after acting as a player coach for Swindon Town. Since then, Neil has been a firm fixture in the media and broadcasting world. An insightful pundit, Neil Ruddock regularly appears for TalkSport and Soccer AM, providing an insightful perspective into the game whilst entertaining viewers with his personality, wit and charm. Ruddock’s regular appearances in the media proves testament to his status as one of the most desirable football speakers on the after dinner speaker circuit.

Appearing on the third series of ITV’s I’m a Celebrity… Get Me Out of Here!, Neil furthered his popularity with the British public and secured his status as a household name. Ruddock has also been involved in the television programme, Razor Ruddock’s Pass & Move Soccer School where children released by academies were coached by Ruddock as well as helping to produce Football Saved My Life a reality sports TV show.

A wonderful sports speaker for events, Neil Ruddock describes the drive and determination needed to be an elite professional footballer with a mix of anecdotal tales from his experiences both on and off the pitch. A tremendously popular figure within the game, Ruddock’s thoroughly entertaining and colourful story is almost unrivalled within the world of football speakers. Neil ‘Razor’ Ruddock is available to hire for any event as a football speaker.

To book Neil Ruddock to make a personal appearance at your corporate event, function or conference, simply contact the Champions Football Speakers agency by filling in our online contact form or by calling a booking agent directly on 0207 1010 553.