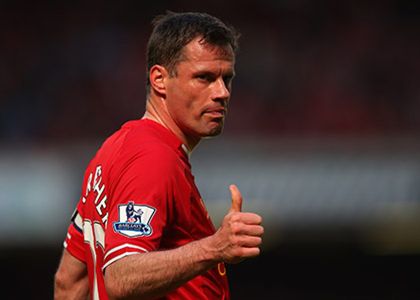 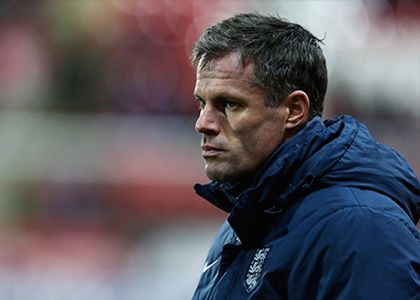 Jamie Carragher is a former English footballer who is best known for playing as a defender for Premier League club,Liverpool Football Club for an impressive seventeen years. Regarded as one of the best English and Premier League defenders of his generation, Jamie Carragher epitomises loyalty having played for Liverpool for the entirety of his career and leaving the club as a legend.

Currently an incredibly popular and respected pundit on Sky Sports, Carragher was Liverpool’s vice-captain for ten years and is the club’s second-longest ever serving player, making his 737th appearance for Liverpool in all competitions in May of 2013. Additionally, Carragher also holds the record for the most appearances in European competition for Liverpool having made an astronomical 150 appearances.

Carragher grew up as an Everton football fan before deciding to play for arch-rivals, Liverpool. Beginning his footballing career at the Liverpool academy, Carragher made his professional debut in the 1996/97 season, becoming a first team regular the following season.

Jamie was initially played as a full-back, however the arrival of manager Rafael Benitez in 2004, saw Carragher move to become a centre-back, where he found his best form and the position in which he became most effective and best known for as he formed the heart of the Liverpool team.

Carragher enjoyed a truly illustrious and decorated career at Anfield, his honours with Liverpool include two FA Cup titles, three League Cup trophies, two Community Shields, the famous and coveted Champions League which Carragher fondly reminisces as a football speaker, along with one UEFA Cup and victory in two Super Cups. Carragher’s most prestigious and cherished moment in a Liverpool FC shirt came in Istanbul, a night that will forever hold a place in the heart of fans and followers. Carragher discusses how his side continued to preserve and turn around a 3-0 deficit at half time to produce one of the greatest comebacks of all time to win the UEFA Champions League following a penalty shootout.

Internationally, Carragher held the national record for most caps at under-21 level and earned his senior debut in 1999. He represented England at the 2004 European Championship and the 2006 FIFA World Cup, before announcing his retirement from international football in 2007. Jamie did however temporarily come out of retirement in order to represent England at the 2010 FIFA World Cup, before retiring once again with 38 senior England caps.

A strong, versatile and consistent ‘old fashioned’ centre-back, who was known for his determined work-rate, loyalty, leadership and commitment, as well as his courageous, no-nonsense and hard-tackling playing style. Carragher was gifted with organisational ability, intelligence, concentration and tactical awareness, which enabled him to excel in reading the game and to produce last-ditch tackles. Carragher has also been described as a fierce competitor, who was physical and smart enough to marshal the backline as a leader.

Former teammate, Jamie Redknapp, described him as ‘ultra-competitive and probably the most driven footballer I have every met’. Carragher was named by well-known footballer, Didier Drogba as the toughest opponent he had every played against.

Carragher is an incredibly popular football pundit and ever present on football coverage across the nation. An integral part of the Monday Night Football team, the proud Liverpudlian is often engaged in harsh critique of performances and differing views and opinions to rival and fellow football speaker, Gary Neville. Carragher tremendous experiences cultivated from a quite magnificent playing career allow him to make incredibly well informed analysis on matches.

The three time Liverpool Player of the Year award winner and former member of the PFA Premier League Team of the Year, Jamie has also been awarded with the Freedom of the Metropolitan Borough of Sefton, a reflection of his tremendous career. A true Liverpool legend, Jamie Carragher has enjoyed a sensational career which has provided him with a wealth of knowledge and experiences in the form of a host of tales and anecdotes which he shares as a football speaker. A true English footballing icon, Jamie Carragher is available to hire as a football speaker and is certain to be a fantastic addition to any event or function.

When at corporate events, Jamie is known to cover the following topics:

To book Jamie Carragher to make a personal appearance at your corporate event, function or conference, simply contact the Champions Football Speakers agency by filling in our online contact form or by calling a booking agent directly on 0207 1010 553.