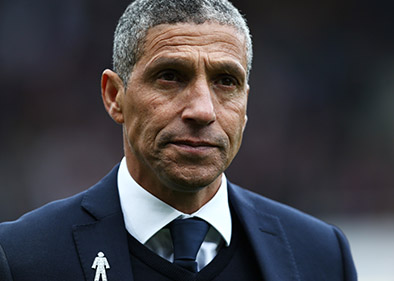 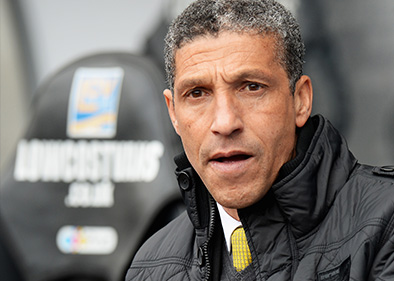 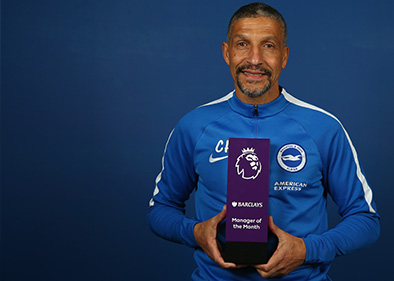 Chris Hughton is a former Irish professional football player and the current manager of Brighton & Hove Albion. The first mixed race player to represent the Republic of Ireland national team, Hughton enjoyed a successful career as a player namely with Tottenham Hotspur whom he represented on almost 300 occasions. Playing 53 matches for the Republic of Ireland, the former full back has gone on to become a very successful and well-respected coach and manger.

The England Athletics Coach of the Year at the Lycamobile British Ethnic Diversity Sports Awards, Chris Hughton is also two time Football League Championship LMA Manager of the Year. A decorated career as both a manager and player, Hughton has two FA Cup winners medal and a UEFA Cup winners medal and now works extensively as a football speaker alongside his role as manager of Brighton & Hove Albion.

A childhood prodigy, Hughton made his professional debut aged 20 and spent most of his playing career with Tottenham Hotspur as a left back before leaving in 1990 after 13 years at the club. After relatively brief spells with both West Ham United and Brentford, Hughton retired from playing in 1993 at the age of 34. An impressive International career, Chris Hughton earned 53 caps for the Republic of Ireland, scoring one goal and represented the country at the UEFA Euro 1988 in West Germany.

During his work as a football speaker Hughton discusses what it was like to make history becoming the first mixed race player to play for the Republic of Ireland as well as sharing the responsibilities that came with being a role model and example to the younger generation.

A natural leader that often discusses motivation and inspiration during his performances as a football speaker, Hughton's first engagements as both a coach and assistant manager came for former club, Tottenham Hotspur where he remains a favourite amongst fans and regularly returns as a football speaker at club functions. Succeeding and showing tremendous promise in his roles at the club, Chris Hughton went on to join Newcastle United as first team coach in 2008 and following their relegation, became caretaker manager.

His first exclusive role as a manager, Hughton shares what it was like to be at the helm of a football club with such proud history along with eloquently discussing leadership and managerial advice with guests during his role as a football speaker. Chris masterminded Newcastle's return back to the Premier League in just his first season in charge, along the way breaking a number of records and securing the permanent managerial position. This incredible performance and leadership led to Hughton gaining huge praise and adulation from the footballing world and he shares the pride and joy of such an accomplishment during his work as a football speaker.

A shock to many, Hughton was sacked as manager at Newcastle United the following year and speaks of the challenges and dissepiment that came with the news during his work as a football speaker while highlighting the resilience and drive he showed to succeed in the future. Going on to manage Birmingham City for a single season, Hughton led the team to fourth place in the league before joining Norwich City in June 2012.

Following his parting with Norwich City, Chris Hughton became manager of Brighton & Hove Albion midway through the 2014-15 Championship season, securing the club's safety within the division. In the following 2015-16 season, Hughton guided Brighton to an impressive third-placed finish, narrowly missing out on promotion to the Premier League through an inferior goal difference of two goals. As a football speaker, Chris Hughton passionately shares the disappointment he and the club felt at agonisingly missing out on promotion in such devastating circumstances while also expressing the hunger, desire and belief it provided for the future, a vital lesson that is both applicable and relatable to all guests.

Chris Hughton etched his name in Brighton folklore the following year however, under Hughton's management the team earnt promotion to the Premier League for the first time in their history and in doing so returned to the top flight of English football for the first time since 1983. A fantastic achievement, Chris Hughton speaks with great joy and adulation about the record breaking and historical achievement at events where he is available to hire as a football speaker for a range of events and dinners across the UK.

A wonderful manager and true gentleman, the engaging and welcoming Chris Hughton is certain to be a tremendous addition to any occasion.

When he's at corporate events, Chris is known to cover the following topics:

To book Chris Hughton as the football management speaker for your corporate event, function or conference, simply contact the Champions Speakers agency by emailing footballagent@championsukplc.com or by calling a booking agent directly on 0207 1010 553.