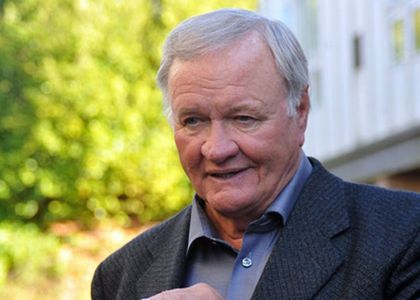 To book Ron Atkinson to make a personal appearance at your corporate event, function or conference, simply contact the Champions Football Speakers agency by filling in our online contact form or by calling a booking agent directly on 0207 1010 553.

Affectionately known as ‘Big Ron’, Ron Atkinson is the epitome of an English footballing legend. The former English player and manager became one of Briatin’s best known pundits. Spending his entire playing career at Oxford United, Ron Atkinson went on to manage some of the largest football clubs in the country before turning his attention to punditry and guest appearances. A formidable football speaker, Big Ron talks of both his playing and managerial career, providing insights into the sport that is rarely caught by the cameras.

Ron transferred to Oxford United from Aston Villa in 1959 on a free transfer. Playing alongside his brother, Ron went on to make over 500 appearances for the club, a record that still stands to this day. Nicknamed ‘The Tank’, Ron is the only player to have ever captained a club from the Southern League through three divisions of the Football League. As a football speaker, Ron discusses the attributes required in a sportsman in order for them to achieve goals and maximise success at any opportunity.

Following his retirement from playing, Ron Atkinson turned his attention to another facet within football to become a football manager at Kettering Town. At the tender age of just 32, Ron led to side to win the Fourth division title in 1977 before leaving them on the brink of promotion to the Second division to move to become manger of West Bromwich Albion. Atkinson’s spell at West Brom would prove to be a career defining tenure, his leadership and managerial ability went from strength to strength and Big Ron’s managerial prowess did not go unnoticed.

Ron Atkinson took over as manager of Manchester United manager and led the club to FA Cup glory in 1983 and 1985. Atkinson’s stature as manager continued at a number of leading clubs following his time at Old Trafford, including a spell in charge of Atletico Madrid, Ron Atkinson is one of the best football speakers to talk about some of the biggest games of that era as well as his encounters with the giants and icons of the sport at the time.

Atkinson’s final post in a managerial job came at Nottingham Forest during the 1988-1989 season, his managerial career yielded two more trophies prior to his retirement winning the League Cup while in charge of Sheffield Wednesday and Aston Villa. Ron retired as a football manager and joined ITV to become a leading pundit and analyst. With a wealth of knowledge and experience within the game, Atkinson quickly became a stalwart figure in commentary for football in the 1990s with his endearing personality and very own dialect which many described as ‘Ronglish’.
Controversy surrounded Atkinson in 2004 when comments he made in the belief the microphone had been turned off brought huge scrutiny and adversity for him both personally and from a career standpoint, a traumatic time which Ron discusses in his performances as a football speaker.

A truly idyllic football speaker, Ron Atkinson is certain engage and interact with guests to ensure all attendees feel a part of his stories. A tremendously quick witted and humorous character with a host of tales and anecdotes to share, Ron will mix the comical side of football with crucial advice from a career spent in a competitive and elite environment. A fantastic addition to any event, Ron Atkinson is available to hire as a football speaker.